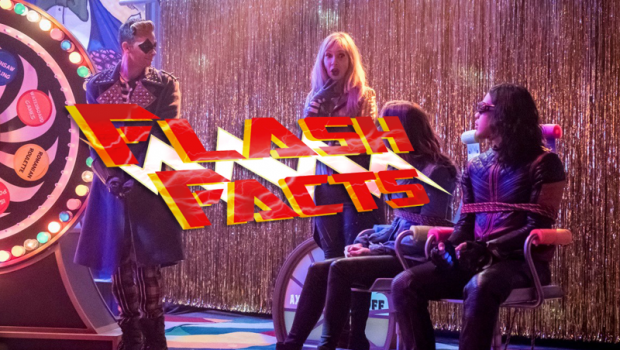 It’s not a stretch to say this is the best “Rises” DC has ever put out!

What? If the episode can overuse that pun, so can I! As the (rather suggestive) title suggests, this episode is primarily focused on Ralph Dibny’s graduation from zero to hero and, I have to say, it’s really enjoyable!

I have to give props, again, to Hartley Sawyer’s performance because his Jim Carrey-esque mannerisms really suit Ralph’s personality as an elastic-faced goober. He’s so expressive and gets a fair amount of sensible chuckles out of me any time he’s on-screen.

Not so much a fan of his new costume though. It’s too dark and looks more akin to the Firestorm suit than the white and lilac one Ralph is known for. Hell, I’d even take the Plastic Man rip-off suit! I’m surprised Ol’ Plas wasn’t name-checked as a potential title for Ralph. Another surprise came in the form of Bill Goldberg, the WWE/WCW icon! He plays a prison hard man called Big Sir who knew Henry Allen and subsequently protects Barry. It’s a neat little role for someone who is both old and hench, and Bill does the job admirably.

Yet another surprise was both the return of Axel Walker, aka The Trickster, but also a The Flash ‘93 alumni, Corinne Bohrer! She plays Axel’s mother and the ex-partner in crime of the original Jesse James Trickster, again referencing the ‘93 series’ continuity while adapting it to the new one. Together, Axel and Zoey are quite a delightful, boisterous duo and really inject some energy and fun into their roles, something other villains on this show fail to do.

You and me both, sister! We get a little more time with Barry and Iris, in scenes that are VERY reminiscent of the first seasons Barry/Henry discussions and it feels played out already. We know Barry isn’t going to be in jail for long because god knows they’re not going to let Wally take over…

Finally, we come to the return of Jessica Parker-Kennedy’s Mystery Girl, who offers some slightly odd but very friendly words with Ralph and Cisco after paying for their coffee. Her bubbly personality seems to throw the pair off-guard but I think I would be the same — then again I’m British and we subsist on a diet of quiet indignance and distrust of the blissful.

Since I didn’t get the chance to talk about her more in Crisis on Earth-X, I guess I’ll give my theory on who she could be given she reveals to be writing in the same odd language that Barry did when he returned from the Speed Force. I’m putting a fiver on this and saying that Mystery Girl is… Jenni Ognats aka XS!

Naw, I’m playing with you! It’s most likely Dawn Allen, one of Barry’s twin kids but having XS show up could link to the Legion of Super Heroes which would also mean we could get a “Legion of Three Worlds” style crossover going. Nah, it’ll be Dawn. Good choice though since she looks an awful lot like a mix between Barry and Iris.

Overall, a damn good episode with some good laughs, neat cameos and fun overall plot. Next week seems to be walking back this episode’s good will by taking one of the DC’s most deranged murderers and playing his abilities for laughs in Honey, I Shrunk Team Flash.

PS, y’all should be watching Black Lightning because no other CW show has had a stronger beginning than this show. It’s got such a unique feel, between the cinematography and utilising Atlanta as a filming location, it’s well worth your time.