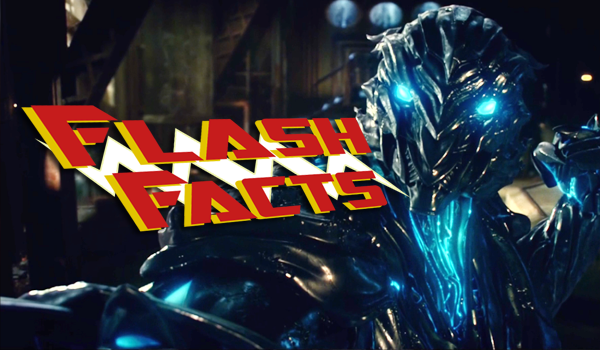 Seriously, why call this episode Shade when the titular character isn’t even the focus? Hell, he doesn’t get a civilian name, his motivation isn’t explained or if he’s even related to the Alchemy case. For fuck’s sake, writers… The primary focus is on Wally and Caitlin, both of whom are struggling with their emerging powers.

It’s good to see Caitlin finally confide in the team, even if it’s not exactly how she wanted to do it. Super-cool to see the future vibe with Cisco and Caitlin duking it out in full costume, even if it means Caitlin will be turning to the dark side. Interestingly, it’s not the powers or even the knowledge that she was evil on Earth-2 but Barry taking her aside and confessing that Pre-Flashpoint Caitlin never had powers. Nice one, Barry, you played yourself.

Meanwhile, Wally is getting his ass knocked out by Iris! Kapow! I loved that sequence but it really highlights how much power Alchemy has over the Flashpointers (because the show hasn’t given me a catchier name to work with). Even when Wally seems to have regained his senses, he jumps at the chance to become a speedster when Alchemy’s philospher’s stone calls out to him.

Notable by his absence is Julian Albert, who disappears at a crucial moment. It’s established earlier in the episode that he’s got a date with his girlfriend and I hope that leads to a comical reveal rather than what we’re lead to believe; that Julian is either Alchemy or… This gorgeous Bayformer-looking badass; Savitar. Damn, what an incredible introduction to a new villain. Savitar is so fast that only Barry can see him, barely catching glimpses of his whitish-blue lightning before being bodied hardcore by the self-titled God of Speed.

Flash Fact: Savitar takes his name from Savitr, the Hindu god of motion.

While the episode is light on action, it’s steeped in character development and introduces, arguably, The Flash’s greatest nemesis. Candice Patton does a fantastic job but her coming to terms with her secret doesn’t really have the impact of, say, Alex Danvers in Supergirl this week. Still, a good episode and we’ll see Caitlin truly step out into the cold next week in Killer Frost.