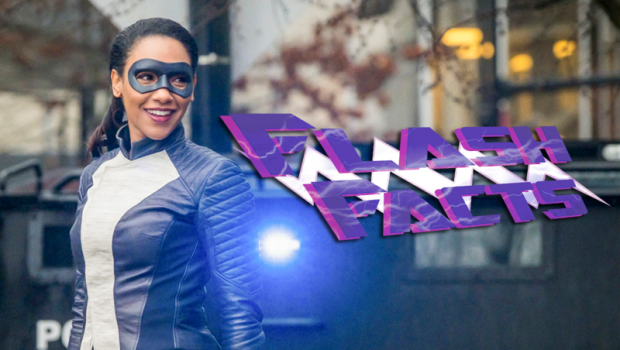 Well, that was all very filler-y.

Run, Iris, Run might share a thematic similarity to last week’s Enter Flashtime, in as much as this is a story that could be pulled right out of the silver age of comics, but is so poorly paced that no single plot element really has a chance to fully develop.

Take for instance the crux of this episode; Matthew Kim aka Melting Point (played by Leonardo Nam who you might remember as the put-upon lab tech Felix in Westworld). This bus meta’s power is to transfer meta-abilities between hosts and seems to have a strong sense of right and wrong. With his ability, Matthew takes the flame powers of a would-be bank robber because he ‘doesn’t deserve them’.

He feels that metahumans have a responsibility to go with their great powers and he can make sure the system kinda regulates that, switching powers to those who he feels worthy. It’s a neat idea and his day job as an EMT certainly paints him as someone who wants to do good but we get basically no time with him in this episode.

In the B-plot, Harry wants to build a device similar to DeVoe’s thinking cap, which everyone agrees is a good idea… Except Cisco. I mean, he does have a valid point that DeVoe has clearly been sent mad by using it but we know he’s going to help anyway so unfortunately, a good ten minutes is devoted to this plot point going round in circles until Cisco relents.

Finally, we come to Iris gaining Barry’s speed thanks to Matthew’s abilities and it couldn’t come at a more convenient time because, for some reason, Ralph has decided to be a massive tool to Iris about being the non-powered woman in the chair. It’s such a bullshit conflict that serves no purpose than to make Ralph look like an asshole and to make Iris look weak when SHE apologises to HIM by the end of the episode.

Iris using the opportunity to prove to herself that she still has her courage is a good motivation for her this episode though. Ever since Savitar, she has been a lot less gung-ho, preferring to stay in the cortex as the team’s coordinator/leader and who is paying this woman? She doesn’t have a job, Barry doesn’t have a job… who is paying for their apartment? Hrm…

Anyway, with less of a field role, Iris has been feeling complacent and Ralph’s out of character comments got under her skin so she revels in having super speed, something we haven’t seen Barry do in a while. She gets a short amount of training before her first mission which goes pretty good, despite her getting trapped under concrete.

Barry, meanwhile, is doing an amazing job of being supportive while also having a massive moan. We get it, you feel inadequate, you should! I would rather watch any other speedster than you, Barry.

Iris, naturally, gets a costume and I do like that it incorporates the motorcycle jacket she was wearing earlier in the episode and that despite both her and Barry’s reservations in switching roles, they both perform admirably and take out a firenado while also nabbing Matthew Kim in the process.

In the end, everything is reset to how it was and now they have another meta they will inevitably lose for stupid-drama reasons.

I really wish the Matthew and Iris elements of the plot were given more time to breathe. More time talking to Matthew about the whys and wherefores of his creed and more time training Iris, giving her some valuable combat experience. Overall, just a touch over mediocre.

Flash Facts will be on a break until April 11th when we’ll see the return of Kevin Smith as director and I’ll be hoping the episode won’t leave me Null and Annoyed.