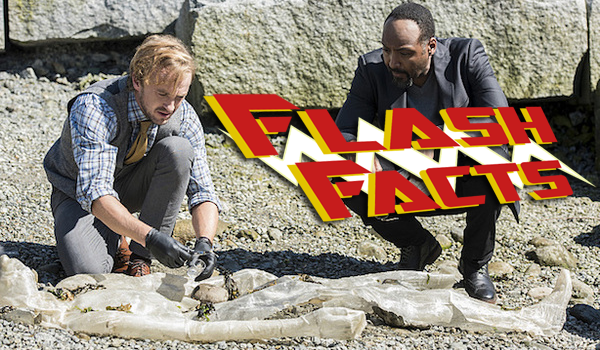 Oh my god, Barry! You really screwed the pooch on this one. I mean… You messed up a whole bunch of stuff because of your stupid, irresponsible, selfish dicking with time and the absolute worst thing you did was YOU BROKE CISCO!

Hoo-boy, Paradox is a real game-changer for the most part. It introduces numerous changes to the canon, establishes (and all-too-quickly resolves) some major conflict and sets up the main antagonist(s) for the season.

Can we stop explaining time travel and alternate timelines now? Do the stupid people in the audience get it? Because if I see ONE MORE GOD DAMN explanation that isn’t simply ‘Back To The Future II’, I will drop this show. It was nice to see Jay again though.

Flash Fact: Jay reveals that they’re in 1998, shown by Dawson’s Creek playing on a TV in the diner. John Wesley Shipp played Dawson’s father on that show too!

Welp, the Arrow fans who don’t watch The Flash are going to be confused about that John Diggle Jr reveal, huh? I heard Diggle was going to be effected by Flashpoint but I didn’t think genderswapping his baby would be it. That’s such an odd choice but I guess that explains John Diggle Jr being Green Arrow in the future that was shown in Legends of Tomorrow.

Tom Felton joins the cast starting with this episode and already the sexual tension with Gustin is thick in the air. According to Tumblr anyway… But seeing the Ex-Malfoy playing a good guy is immediately suspicious but he does have good reasons for not liking Barry which will no doubt be worked on as the season progresses.

We finally get a look at Doctor Alchemy (voiced by Jigsaw from the Saw franchise, Tobin Bell) and it appears he’ll be responsible for creating new metas, since that pool of pipeline metas is getting rather dry. Not too much to say so far but considering he can grant powers, we may see another instance of Barry losing his powers but I really hope not.

Overall, Paradox is solid but is more of a set-up for the new season and next week will see that kick off with a brand new Rogue and the return of another rogue-ish character in Magenta.