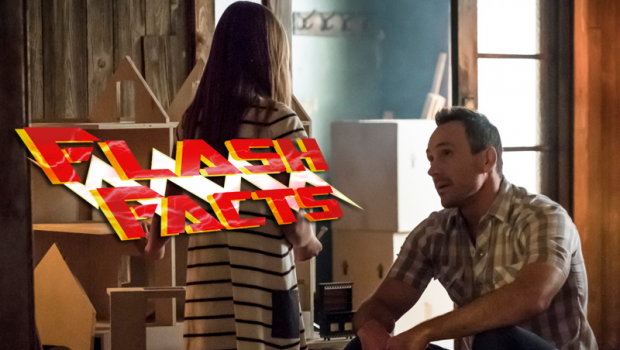 Thanksgiving was my birthday so I’m thankful for that, I guess?

Yeah, sorry lads, British guy here and I don’t get Thanksgiving, really. One of the obligatory holiday episodes, O Come, All Ye Thankful is about as schmaltzy and bland as a Hallmark movie and I didn’t enjoy the overall experience, but there’s a couple things that I either enjoyed or were genuinely good.

Like Caitlin’s pun. That’s the biggest laugh this show has given me in YEARS. Good stuff!

Nora’s schtick for the episode is realising that her father is a reckless idiot who almost gets himself killed on a weekly basis. I find it funny that the Flash Museum exists as a microcosm of The Flash show, constantly trying to paste over all the shit that Barry’s pulled for stupid or selfish reasons.

It makes a change to see Nora get pissy with Barry instead of Iris (though she cops some attitude too) and I’m tired of her giving out about things not being like she thought when HER VERY PRESENCE IS DESTABILISING THE TIME STREAM. Seriously, she’s cute and fun and all but she’s still fucking up time the longer she’s here and everyone knows that.

With the Cicada sub-plot, we get his secret origin and damn, Cicada just might be the most relatable character on the show at the moment. His role as a reluctant guardian who comes to realise that he needs to step up makes for a very compelling character and his motivation believable. Hell, half of me wants him to run wild on Team Flash just for shits and giggles.

Oh, and I guess Weather Witch was the villain du jour? It was a completely nothing plot point that was resolved as quickly as it was brought up.

And Killer Frost made fun return to berate Cisco and Sherloque about being Thanksgiving Grinches. That’s a thing, right?

Apart from Cicada’s origin, this episode was pretty boring for me, only keeping me engaged with a couple funny gags. Next week is a milestone for The Flash as the show reaches 100 episodes and while Flash Facts isn’t quite at that milestone due to combined reviews, it’ll still be the 100th episode I’ve reviewed! Come back next week and celebrate with us because, as the saying goes, What’s Past is Prologue.