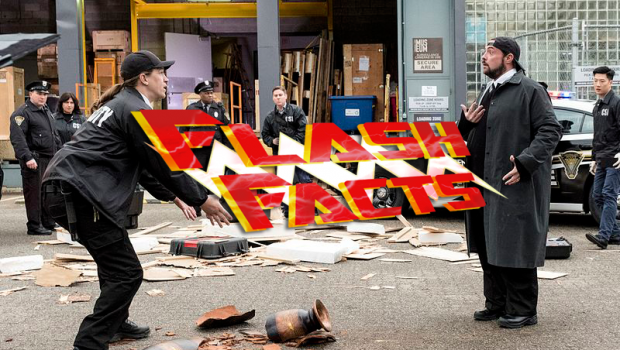 Over a month of waiting and yeah, that was certainly an episode.

Null and Annoyed is a mediocre episode that’s only interesting thanks to the the director, a returning Kevin Smith, giving what felt like more time to the sub-plots.

I’ll touch on the main plot briefly as it shows us the next Bus Meta, Janet Petty aka Null. Null’s gravity powers are cool but as with most metas, that’s pretty much all she is. Janet Petty isn’t even her proper name because Null is a gender bent version of a guy who didn’t get one! But she’s the villain du jour and helps Barry learn a lesson about Ralph’s seeming goofing off and I swear we’ve done this before but to hell with it, I don’t care, because the only part of this plot line that I liked was…

The cameo of Kevin Smith and Jason Mewes as Bob and Jay, the Central City Museum’s most hapless security guards! It was nice to see them together, paying homage to their most beloved roles.

In the first side plot, we see Breacher (played by a returning Danny Trejo) come to Cisco for help after his vibe powers cut out before he can finish a vampire lord. Through some comical and sincere dialogue, we find that Breacher has gained some modicum of respect for Cisco, but Cisco is trying to please Gypsy’s father into letting him see more of her. Eventually, after a close shave with the aforementioned vampire lord, Cisco comes clean and Breacher departs furious.

It’s weird that his offensive vibe powers don’t work but his breach ability remains intact but regardless, Breacher, or rather, Joshua returns in his retirement best, to reconcile with Cisco and to offer his thanks and to offer Cisco a job; as the new Breacher.

Meanwhile, at DeVoe’s Dungeon, Marlize’s character goes through some very interesting development as she discovers that her husband has not only been lying to her but also drugging her using the euphoric tears of the Weeper. Kim Engelbrecht offers a stunning performance as she leaves herself a tearful message to warn herself of Clifford’s deception… only to discover that she’s done so at least once before.

It’s a pretty neat twist and Clifford reveals that this scenario has played out multiple times before and he drugs her once again, a similar version of an earlier scene playing out like some demented Groundhog Day.

Throughout the episode, we see harry use his own thinking cap more and more and becoming increasingly frustrated but it’s not until the end of the episode that we see Harry access Thawne’s secret room, place his thinking cap where the Reverse Flash suit once resided and activate Gideon, his tone of voice becoming darker. For me, this seems like they’re following through on Cisco’s warnings about the thinking cap and cementing Harry’s heel turn by making comparisons to ThawneWells, which has actually been foreshadowed in previous episodes.

Overall, it’s a mediocre villain of the week episode with a couple instances of good character development but this slow spiral down in quality is only exacerbated by watching the other CW shows for me. Black Lightning has continued it’s streak of strong writing and intriguing plot while Legends has been mucking about and not taking itself too seriously while also being incredibly endearing as the visibly cheapest of the five shows. And I guess Supergirl’s coming back but meh.

I’ll see you all next week when Team Flash goes on the offensive and invades the DeVoe Dungeon in Lose Yourself.