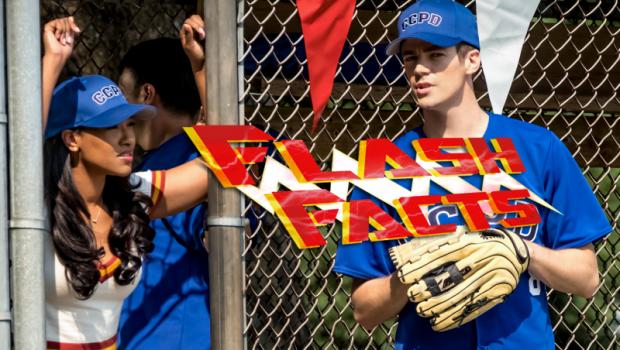 I don’t know what bothers me more, the fact that the show hasn’t used that title before or that I didn’t use it for this review series.

I really enjoyed News Flash! It had an interesting villain and some very solid character bits and no one annoyed the fuck out of me so I’m taking the win on this one.

Okay, I got a real sense of catharsis from Caitlin gut-punching Sherloque but come on, he’s an insufferable prick and he got what was coming to him.

Ralph showcasing his detective skills was a bonus too, glad he’s not pigeon-holed into just being the comic relief and actually has a role on the team.

The Iris/Nora dynamic continues to be awkward for an unsaid reason, revealed later in the episode, but there’s a little moment that really made me smile after Nora managed her first solo fire well.

That said, the reason behind Nora’s resentment of her mum comes to the fore when it’s revealed Iris installed an inhibitor chip in Child-Nora to cancel out her speed. There’s an allegory for any number of shitty parental behaviours in suppressing a child’s uniqueness here but don’t feel I have enough experience to talk about most of them but I recognise the place it’s coming from. Buuuuuuut I can agree with Future-Iris’s decision based on one factor. Cicada. It’s established that he’s never caught and with Barry gone, I can understand Iris as a character taking drastic action to protect her child. She’s known to be neurotic and prone to stupidity when emotionally compromised. She’s still a shitty parent but it’s understandable.

And I love that Barry is 100% behind his future-wife’s future-decision based on who Iris is now, that’s top-nothing Dad-ing and husband-ing. It does shake Nora though and she ends up staying with Joe and Cecile for the night, possibly the foreseeable future.

I really liked Spin too, she’s a cool villain that could have had a bit more time rather than being a one-and-done. She’s a perfect personal foil for Iris and having it be a subplot, would allow for more intrigue going forward. Plus the potential romance with Nora could have been interesting.

Also, Barry’s reaction to finding out his daughter likes girls is just precious. It’s peak Gormless Barry and I had a good sensible chuckle at it.

Spin’s “abilities” are interesting, and the source of them even cooler, and is a good justification for a more varied metas we could be encountering this season. Given that most of Flash’s more famous Rogues are tech-based, we could see a couple show up again with new, enhanced weapons.

As I said before, I really liked this episode and after looking at the future episode titles, we could see Spin return but for now, be sure to come back next time because things are bound to be a little strange when we get All Doll’d Up.