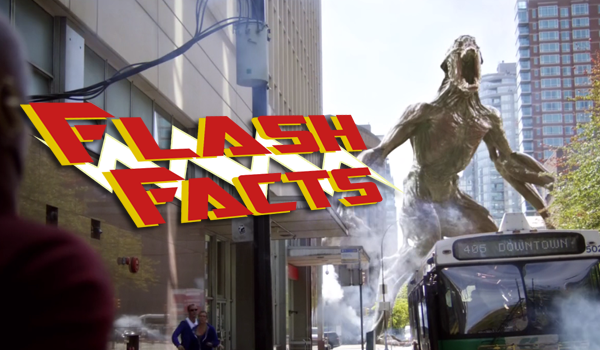 I’m friends with the monster that’s under my bed…

Man, I was all set for this to focus solely on Caitlin and her mum issues but, to my surprise, we had three distinct contenders for monster/villain of the week so kudos for playing with my expectations, show!

First up, New-Wells can fuck right off! I can appreciate Tom Cavanagh varying up his performance but jaysus, this guy is insufferable. I did enjoy the double fake-out of New-Wells first being an author-slash- scientist and finally revealed as a fraud. I still don’t like the character though. He talks like he stepped out of Alan Moore’s Crossed +100 and I’m still convinced he’s a bad guy. He could be a Durlan for all we know, it wouldn’t be the first CW show this week with a shape shifter in focus. I’m kind of disappointed that the giant kaiju hologram wasn’t A) some manner of alien and 2) that it’s creator wasn’t even given a god damn name! This has all the hallmarks of the third Toyman, Hiro Okamura, but alas; this nuance character is just there to make Julian eat crow. Speaking of…

The writers aren’t going to let you live down being Draco Malfoy are they, Felton? Once again, I find Tom is giving it socks but this time as a despicable narc and later as a repentant puppy and for the best reasons. In a city full of dicks with superpowers, you’re going to be a bit embittered that a decent person like you didn’t get powers too. The whole feeling powerless speech he gave struck a chord with me and I hope we see more of him soon.

Has Caitlin always had a troubled history with her mum or was that changed by Flashpoint? Honestly, I can’t remember and that really is the show’s fault because the fact that I can’t remember anything about her family but can with Cisco shows that she has been woefully underdeveloped in that department. It’s nice that we get another swerve as you’d expect Dr Tannhauser to be all evil but she’s actually a pretty decent mum and it’s that insidious Nigel that get a touch of frost. Ha! Nigel… But we’re seeing her slowly progress and a hint that maybe her Killer Frost identity is seperate to Caitlin herself.

This episode flew by and kept me guessing the entire time as to who would finally be the titular monster but it turns out the greatest monster of all is man. We’ll be back in two weeks, because of the US Presidential election, when Wally is going to be throwing Shade.