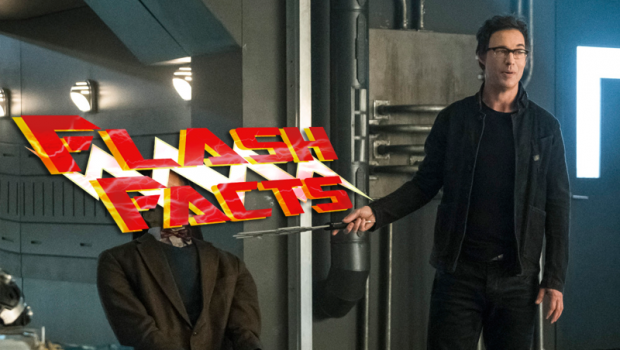 Lose yourself in the music, the moment, you own it, you better never let it go.

Hoo-boy is the subject matter for this episode so cut and dry that this is barely going to be a review, more a series of statements that culminate in me saying that Barry fucked up yet again. Shall we begin?

First up, we’ll touch on the b-plot of Harry being a massive bell-end and getting hooked to the Thinking Cap like a drug addict would, something Joe is quick to point out. Harry doesn’t learn his lesson, pumps his brain full of dark matter and goes a bit dense at the end while also giving DeVoe what he wants. Stellar. At least Barry’s not the only dumbass this week but Harry is a legit close second.

The key debate of this week’s main plot is whether or not heroes should kill. The default answer is no, that’s basic stuff and everyone knows that but outside the childish realm of Saturday morning cartoons, the reality is not so black and white.

Ralph is well up for killing DeVoe and, frankly, so am I. He’s a clear and present danger and everything else they’ve done (as Ralph points out; the same old plan) has failed. They have a means, they have a method, but Barry’s holier than thou morality is standing in the way.

And at a basic level, I can understand. Barry hasn’t met a foe who can’t be dealt with with a stern talking to and a slap on the wrists. Oh wait, no, all of the major arc villains are either dead or erased from history and Barry is perfectly okay with that.

This goes down the same moral mentality that Batman faced in Under The Red Hood. Ralph isn’t saying kill every villain; not the likes of Peek-a-Boo or Top or Trickster but some threats need to be dealt with permanently and I hope him being right gave him some amount of satisfaction as DeVoe walks through STAR Labs, kills the three Bus Metas there and finally takes control of Ralph.

This sucks, mostly because I saw it coming. Hartley Sawyer was giving it socks with his performance but was also raising death flags left and right. It pisses me off that this character was so callously cast aside when we all know damn well that Barry won’t learn a lesson from this and will make the same mistakes next season. I know Oliver Queen can be the agent of his own destruction but at least Ollie’s mistakes haven’t erased families from existence.

Shout-out to Iris for being an utter bad-ass in that Cortex fight though. Rather basic choreography but that sacrifice moment was a belter!Oh, and somehow fighting DeVoe-Dibny mad e Caitlin lose Killer Frost. SOMEHOW. This episode is stupid and I hope Jonathan Butler and Gabriel Garza know how stupid this episode was.

Hopefully next week will be better when the ice man cometh again and Leo Snart aka Citizen Cold returns to deal with the one bus meta DeVoe didn’t take; Fallout in the delightfully named Fury Rogue.