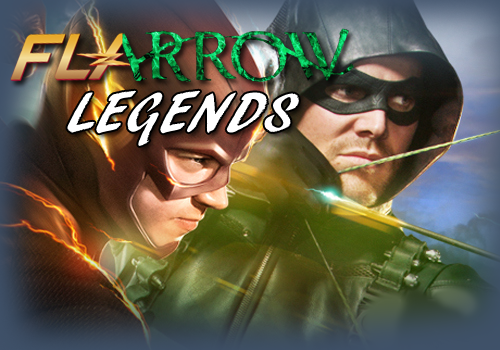 The non-hero parts! Seeing the casts interact with one another is the best part of this crossover by far. Just jokes and drama and more jokes, it’s just a delight to watch.

One of my personal highlights is Cisco inadvertently outing Barry to Kendra, meaning the only person who really doesn’t know Barry’s identity is Patty. Her and Wells get little to no play in this crossover when one shoots the other. Also kind of a waste to give Jay his speed back on to get rid of it off-screen! Boo-urns, show.

Okay, so what does this two-parter do in terms of lore? Well, hot on the heels of the introduction of magic proper into Arrow with John Constantine, here come’s the reincarnated Hawks and the immortal Vandal Savage. They’re really accelerating into the rest of the DC universe now and there’s only one way we can go next. IT’S SPACE TIME!

Vandal Savage’s appearance is here to set-up for the Legends of Tomorrow series coming next year (nice nod with the titles of the episodes too) as well as the Hawks’ and Barry/Ollie’s knowledge of Savage. It makes sense the League of Assassins are aware of him. Hell, the Lazarus Pit is probably made of his piss or something.

The Hawks are pretty solid, Kendra establishing herself early doors in Flash and Carter being introduced as a self-assured douche-nozzle. Coming in and stealing Cisco’s girl… What a jerk-ass!

In a surprise move (which is totally ruined by the recap) we get the introduction of Oliver’s son, William. Not much to say about that other than his name should have been Connor. It’s not like this will be an issue for Flash going forward.

The actual team-up itself is kind of one-note and stilted. It’s not the best fight either series has showcased and it left me wanting more, unfortunately.

Overall, it’s a bland team-up fight but the character interactions are just as strong as they were last season so it’s still entertaining. Speaking of entertainment, next week is a Christmas cavalcade of crime as we see the return of two great villains and some schmuck in Running to Stand Still.