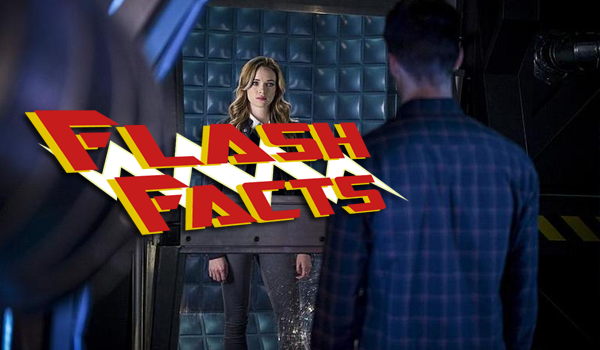 Killer Frost is an interesting episode, indeed. Kicking off with a vicious display of speed, we instantly get a feel for how powerful Savitar is. Being so fast that he’s invisible to regular vision is a nice way to save some money but also acts as a passive display of power. He’s clearly not just a guy in armour either which is interesting.

This is clearly a big bad that will need more than one speedster to deal with and luckily we have at least four, now that Wally’s got his speed. One of the minor missteps of this episode is Wally’s resolution in the final act but that’s an unfortunate story pacing issue that’s not really on Kevin Smith’s shoulders as director.

Flash Fact: Greg Grunburg stars as Detective Tom Patterson and while known for his similar cop role in Heroes, he also hosts AMC’s Geeking Out with Kevin Smith. At least it isn’t Mewes again!

Yes, the Bluntman returneth and while I didn’t really notice any significant jump in camera work like The Runaway Dinosaur, I did like the direction of Panabaker and Valdes’ performances.

If there’s one thing Smith knows how to do, it’s how to direct friends being pissed off with each other and it’s beautifully done here. I like Gustin as an actor but he doesn’t play guilty very well. He’s too much of a scolded puppy who casually admits his faults knowing full well he’ll get away with it. Because he always does. And that makes his performance pretty weak.

Panabaker plays Snow’s schizophrenic dissent into villainy quite well; gradually sloping downwards as she gets angrier at Barry and his time-fuckery, eventually exploding in the pipeline in a diatribe that is absolutely spot-on. He’s selfish and everyone else can only suffer in his wake.

Despite Smith’s involvement, there’s very little fun to be had in this episode but one thing that makes me giggle every time is Tom Felton’s tremendous pratfall after getting socked in the gob. Felton’s got a pretty good role in this episode too. After being taken hostage by Killer Frost, Julian blackmails Barry into quitting the CCPD.

Again, Julian is bang-on with his assessment of Barry, especially from the perspective of someone not on Team Flash. Barry is often absent, acts like an incompetent weirdo and now is going to bat for a criminal. He wants to see justice done and Barry just isn’t pulling his weight and this makes him a fantastic antagonist for Barry, not the Flash, which is unfortunate because…

Oy… I think we can all agree that this reveal was both stupidly obvious and utterly absurd. I mean, we all figured that Julian would be Alchemy but after seeing his character develop, it makes no sense. The coming episodes really need to explain why Julian is Alchemy because nothing so far has pointed to why he would be.

But I imagine that will have to wait because next week will be part of the Heroes vs Aliens crossover between all of the CW shows so, like previous years, come back Tuesday through Friday as we cover…