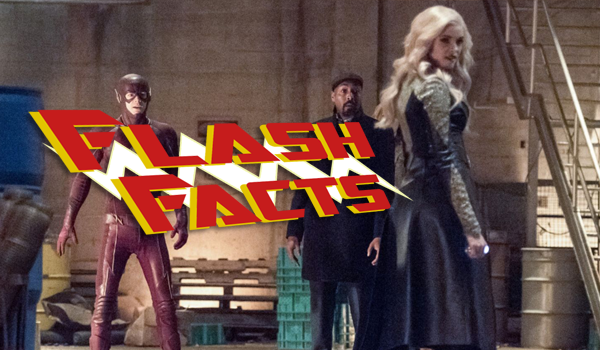 Flash Facts – “I Know Who You Are”

Someone answer that phone because I called it! Now, before we go fully into how right and handsome I am, let’s talk about some of the other aspects of I Know Who You Are.

First up, did Joe take a leaf out of the Oliver Queen guide to being in love because he’s stone-cold stupid this episode. I know they need to give him something to do and while I’m always an advocate for Joe crying, there has to be an easier way… However, unlike every other “I love you but I have to lie to you” conflict in the CW-verse, this is mercifully wrapped up within the same episode. Although I’m not sure if that’s a good thing or just annoys me more because it was ultimately futile.

I love the effect for Killer Frost’s ice-slide, which is something it took the X-Men movies a long time to get to but is executed fairly well here.

I also really like the emotional effect that Caitlin’s heel turn is having on Cisco, who is terrified of hurting his friend. It’s good to see their friendship stretched to this extent and that it’s Albert who has to convince him to do what’s needed to be done. This dynamic going to be fun/heartbreaking to see play out.

There’s also a subplot about recruiting grad student Tracy Brand (not a comic character as far as I know) and getting her to create her speed force trap several years earlier. Also HR is smitten with her. It’s not all that interesting to me, since it’s just a variation of the plans of previous seasons but with a HR romance that’s kind of grating.

Finally, we come to the big reveal and it’s exactly what I said it was! Barry, while having the prerequisite warm and fuzzy moment with the family, goes full Joey Tribianni as he realises who Savitar is, finally putting everything together.

They meet on some deserted road Barry happened to pick for this showdown (don’t think about it, it makes no sense) and Barry monologues before Savitar does the cool armour-opening sequence again and a scarred, maniacal Barry Allen steps out of it, declaring that he is the Future Flash.

What an awesome reveal, just a shame I saw it coming. It raises a lot of questions, especially since we’ve already seen the future and left on good terms so unless this is some multiverse theory BS, this show has some ‘splainin’ to do! This was a mostly interesting episode and we’ll have to wait until next week to get answers as we examine the Cause and Effect.