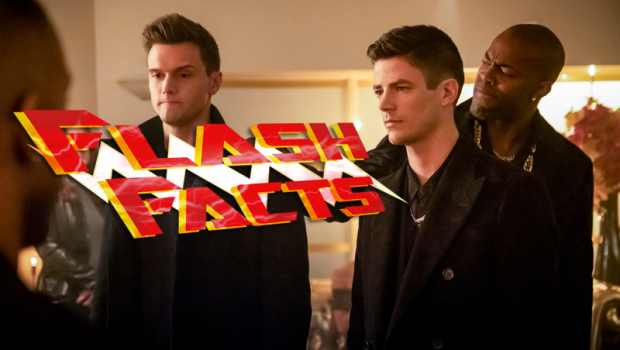 All that glitters is gooooold, only shooting stars break the moooooooold!

Goldfaced is a pretty great episode. It’s light on meta action but the character dynamics in the three plots is fun/tense to watch and it’s all balanced very well.

In an effort to get Sherloque off Nora’s back, Thawne suggests that she play to his greatest weakness; being a notorious puss-hound. Okay, it’s his heart, but he married the same woman 7 times across five different universes, that woman being Renee Adler. Her and Sherloque seem to have good chemistry so it’ll be fun to see their relationship develop in the episodes to come, especially after Sherloque discovers Renee is a meta and is incensed to protect her from Cicada.

Flash Fact: Renee Adler is played by Kimberley Williams-Paisley, most known for her role as Annie Banks, Steve Martin’s daughter in Father of the Bride! She looks great considering I haven’t seen or thought about her in almost 30 years!

Meanwhile, Iris is cruising for a stabbing by pulling a B&E on Cicada’s house. There’s been instances of Iris being badass in the past but I often forget that when she spends most of the season making doe eyes at Barry or being motherly. This episode shows, again, that she’s a badass because not only does she keep a cool head but she kicks the shit out of Cicada!

I mean it; she bear maces his face off, wrecks his doll house, stabs him with a pen and then, for good measure, stands over him and says “We’ll beat you.” DAAAAAAAAAAAAMN, Iris! You scary!

And the last plot thread is the Barry and Ralph Buddy Cop Comedy and I am here for it! Infiltrating a weapons black market for some tech macguffin leads the duo to Goldface, the titular villain du jour and I really dig this dude. He’s a real smooth criminal and while I’m glad he’s not dead and can come back, the dude was bleeding gold out of his eyes, he SHOULD be dead. But it was Barry so we can’t have him kill. Yet. It’s coming, I can feel it.

Flash Fact: Goldface is played by Damion Poitier, a well-known stunt man but comic fans would know him as Thanos in the first Avengers movie!

Also, Barry and Ralph’s running gun fight with Goldface’s goons was scored with Rob Zombie’s Dragula, which is an out-of-fucking-nowhere pick and slapped me in the face with nostalgia for a goth ex-girlfriend so thanks, show?

Overall, I really dug this episode. It didn’t drive the plot forward too much but it was a fun ride at the very least and that counts for a lot. In the same vein, check out this week’s Arrow episode, Emerald Archer, for a fun in-universe documentary theme that breaks up the show’s usual formula quite nicely. Be sure to come back next week as things seem to be coming to a head in Cause and XS.