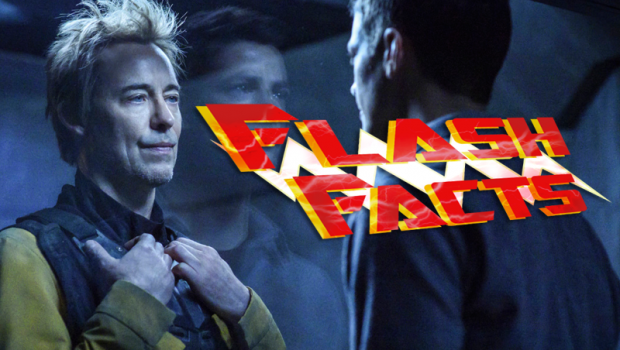 Welcome back to Flash Facts, everyone! I don’t know about you guys but it’s been one helluva month for me with starting a brand new job! I’m currently writing this high on painkillers so maybe that’s having an influence but I think Godspeed was a fantastic episode and a very strong directorial debut for our resident snow queen, Danielle Panabaker!

Picking up immediately after the last episode, Team Flash is still reeling from the revelation that Nora has been working with Thawne since the beginning and, naturally, pretty much everyone is more pissed with Sherloque for revealing the secret. Okay, that’s not entirely true but it was certainly true of Iris. She kinda walks that back by being the one to let Nora out of the pipeline to explain herself though.

The majority of the episode is set in 2049 via flashforwards as the team reads Nora’s diary and the setting isn’t especially fantastical. A very grounded take on the future, befitting a TV budget. Little details here and there show the advancement of technology but the architecture is largely the same as every other CW show set in the present.

The origin of Nora is pretty interesting, expanding on the details we knew but throwing in a lot of time with Nora’s best friend/girlfriend Lia (A possible nod to the Flash of Earth-9?) and how their investigation into a new speedster results in not only Lia’s death but Nora travelling back in time. Speaking of the new speedster, having Godspeed tie back into Zoom and the Velocity 9 subplot is an effective way of manufacturing a speedster to act as a foil. I don’t know much about this guy since he’s relatively new but it’s a cool design and he’s voiced by BD Wong and that’s also pretty cool!

Nora’s interactions with Thawne are pretty cool, very The Silence of The Lambs, and really lends credence to why Nora puts her faith in him as a mentor. Because, despite objectively being a monster, Thawne is both charismatic and a damn good teacher and there’s a nice symmetry to him teaching Barry’s daughter the ropes. Hell, there’s a lot of homages to The Flash’s pilot episode that draws a lot of parallels between Barry and Nora.

Once Nora’s full origin is explained, we actually get the unexpected; Barry sticking to his guns and sending Nora back to 2049! I can’t believe he didn’t forgive her immediately and just dumped her ass back in the future and even warned her that if she tried to come back, he’d know. Properly laying down the dad law! That going to come back and bite him in the arse when Iris finds out though… Oh boy, that’s going to be the whole episode next week, isn’t it?

In the stinger, we get a confrontation between Thawne and Barry and Thawne comes across as the bigger man while Barry looks like a petulant bitch. His anger is warranted, mind you, but Thawne telling him not to be angry with Nora is just perfect. With less than ten minutes to go before Thawne’s supposed death, I wonder how much more we’ll see of him and if death will actually stick this time!

Overall, I highly recommend seeing this episode because it’s one of the best of the season and really went a long way to endearing Nora to me again. Be sure to come back next week when we’ll see the fallout of Barry’s decision and an unexpected reunion in Snow Pack!