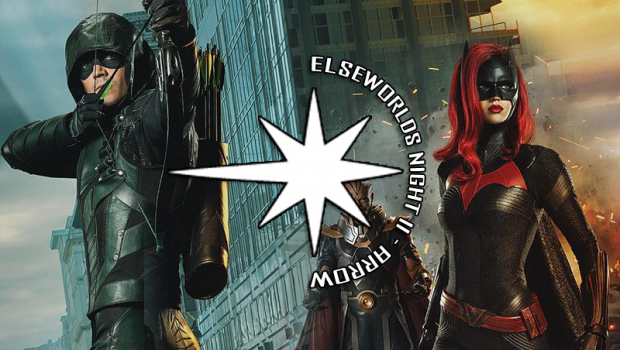 What’s black and red and hot all over?

Welcome back to the second night of Elseworlds everyone and hot damn, this is an episode chock full of easter eggs and references to the wider DCU and I can’t wait to dig in!

First up is the Super Friends throwing shade at Gotham because of course they will. Gotham’s like a shittier Star City but it does have a generally better calibre of bad guy!

Naturally, spending a significant amount of time in Gotham means a trip to Arkham Asylum and that means a whole host of characters that we’re not allowed to show on-screen due to a competing television show; like Oswald Cobblepot, Pamela Isley, Basil Karlo, and Edward Nigma! We also get visual confirmation of the Psycho-Pirate, a character previously referenced in Nora in the article about Barry’s disappearance. More on him later.

There’s also an assortment of villain-themed trinkets scattered around in John Deegan’s office and we get a surprise appearance from nora Fries, somehow not on ice, attacking Caitlin with her husband’s ice cannon.

Not to mention an awesome action scene triggered by Jonathan Crane aka Scarecrow’s fear toxin, which gives us the prerequisiste hero vs. hero fight as Barry and Ollie see each other as their hero identities’ biggest bads; namely Malcolm Merlyn and Eobard Thawne.

There’s a lot of talk about Bruce Wayne and Batman and, naturally, we don’t see even a bat ear of him but I do love this exchange from the Super Friends. Ollie’s already tried to out-alpha Superman and now he’s doing the same with Batman, much to the amusement of Barry and Kara.

This episode is also kind of a backdoor pilot for Ruby Rose’s Kate Kane aka Bat-Woman and I’m digging her performance. She’s a no nonsense, extremely capable fighter in the cape and cowl and strikes a nice balance between business and pleasure in civvies when she flirts with Kara. I hope the proposed series proves successful because I like what I’ve seen of the character so far…

And the prospect of this team-up almost gets me as excited for it as I am for this crossover!

Also, somebody pick-up that phone because I FUCKING CALLED IT! John Diggle is Green Lantern John Stewart! Granted, only on Earth-90 but that’s a hard confirm for me and I am taking the win! BOOSH!

With Deegan’s plan exposed and the mysterious book taken from him, the Super Friends plus Earth-90’s Flash face down The Monitor and are so out-classed, it’s not even funny. They’re nowhere near his level and he, surprisingly, congratulates them for getting the book, a feat not managed by another other world he’s tested.

Yup, my theory on The Monitor testing the various universes is spot-on. He’s handing the Book of Destiny to random people in a given reality to simulate the chaos brought on by a ‘crisis’. The original Crisis on Infinite Earths comic series had the Psycho-Pirate (told you we’d come back to him) become a willing henchman to the Anti-Monitor, a being of immense power that The Monitor alludes to. Given the red skies, the presence of The Monitor and the Psycho-Pirate, and the threat of an oncoming Crisis means bad news for Barry Allen, specifically. We may finally see that headline come to pass, after all.

The episode ends with reality being rewritten again; Barry and Oliver being remade as a criminal pair known as the Trigger Twins, Ollie’s greatest enemies as Central City cops and, worst of all, a black-clad Superman intent on arresting them. Tha’s no’ good.

The second part of Elseworlds is a fantastic middle chapter, giving us more humour but also expanding on the ultimate threat while teasing tougher times to come. I truly can’t wait for the third and final act of this story tomorrow on Supergirl so I hope to see you all then!