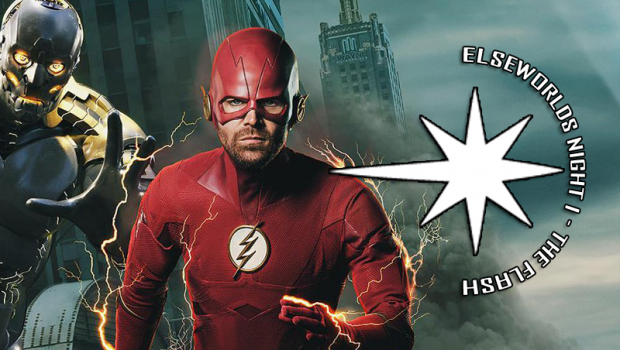 I needed this, and I didn’t even know how much.

Seriously, it’s been a rough week and it’s probably going to get worse so when I say this was the most I’ve smiled in a week, I mean it. Elseworlds Part 1 is an utter delight in every way and a fantastic set-up for what’s to come.

This year’s crossover event kicks off with a bang as it repeats the Earth-90 stinger from the previous week’s shows but at the top to quickly establish The Monitor before jumping to Earth-1, where The Monitor hands the mysterious glow-y book to one John Deegan (you may recognise actor Jeremy Davies from his role as Ritchie Simpson on Constantine).

Deegan appears to be a struggling scientist with ideas that some would brand ‘mad’, which happens during a lecture. For reasons unknown, The Monitor hands the book to Deegan and tells him to remake the world. I guess this is some sort of test, given what happened to Earth-90 and how he said that “You did this to yourself” to that world’s Flash. The mystery thickens but from here on out, I’ll just be telling you about how much fun I had with this episode.

Flash Fact: The Monitor is a character closely associated to DC’s various Crisis events, which also have red skies as a motif. Both are present here and that bodes ill.

Like Ollie not adapting well to being the Flash and screaming old faithful at criminals (and earlier assuming Barry fucked up time again).

We finally have an AMAZO! And he’s just as cool as I could hope! AMAZO is one of those great villains to use for a character-driven story because his schtick is to steal powers and that is it. No monologuing, no hidden agenda, just a big out-of-control robot to punch until it falls down. I also liked how it affectionately nodded at the existing Arrow lore of Anthony Ivo, his ship The Amazo, and Mirakuru.

Meanwhile, on Earth-38, shenanigans are afoot and it’s always a pleasure to see Stephen, Grant, and Melissa onscreen together. Grant and Stephen’s banter is pitch-perfect and is often the best part of any crossover. Ollie trying to be more alpha around the perfectly nice Clark is hilarious. Additionally, Tyler Hoechlin and Elizabeth Tulloch as Clark and Lois are a great match, they have brilliant chemistry. SOMEBODY SAAAAAAAAAAAAAAAAAAVE ME from these Smallville references! The Remy song kicked in before the Earth-38 title card and for a split second I was audibly screaming “WHAT?!” at the idea of a Smallville universe being shown but holy crap, it’s the Smallville farm! That’s so cool! It’s been just long enough for this place to be nostalgic and I’m happy to see out new Superman hanging out.

This scene. I had to pause I was laughing so hard and then I played it again. Perfection.

This is also a damn good scene, despite being the obligatory ‘serious talk’ for the episode. Barry has always been Ollie’s opposite number and the idea of him becoming Ollie is indeed a scary prospect. Expect Ollie wouldn’t erase children from existence. Himself, sure. Loved ones, probably. Children? Only a monster like Barry Allen would do that.

Once AMAZO is dealt with, Cisco talks to Ollie, Barry, and Kara about The Monitor, who appeared to Cisco earlier, and is visibly shaken when The Monitor notices Cisco vibing him again and gives a dire warning. Ollie, though, picks up on a subtle clue and that leads us directly into Part 2 on Arrow tomorrow!

I loved this episode and I have high hopes for the next episode! What are your thoughts on this episode? Be sure to share them on our Facebook and Twitter and I’ll see you all tomorrow for another Elseworlds episode!