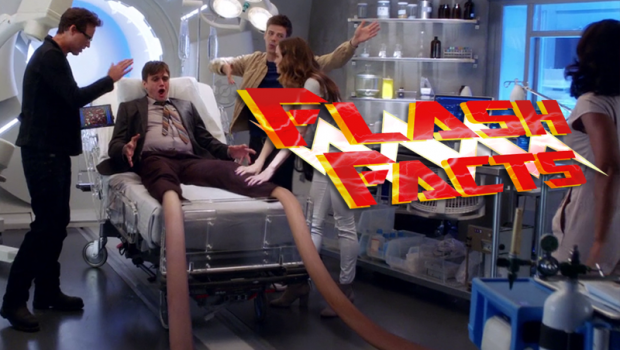 That title’s a bit of a… stretch!

HAAAAA! Puns, I’ve got them! I’ve not felt this good about an episode of The Flash since last season so excuse me if I gush a little. Elongated Journey Into Night introduces two new characters and is the second episode directed by our boy Tom Cavanaugh (the other being The Once and Future Flash), which probably explains why it was really fun!

We’ll get the boring stuff out of the way first: after the shocking revelation of Cecile’s pregnancy, Joe spends a lot of the episode being defensive, flinching at the word baby and insisting that he isn’t ‘glowing’ but after being held at gunpoint by Mayor Bellows, he just blurts it out and is actually fine with it? Did we miss a scene where he actually worked through his feelings? Hm, odd but breaking out the cigars is a nice little celebration’ one shared by Legends of Tomorrow with the birth of Professor Stein’s grandchild!

In the B-plot, Cisco gets a shocking visit from Gypsy’s father, Breacher, and spends the rest of the episode trying to either win his favour or survive his wrath. Danny Trejo is a delight but his no-nonsense character doesn’t really use him to his fullest potential though there are some hilarious line deliveries. This brilliant little sub-plot Cisco finally wins Breacher’s respect (but not his affection) by standing up to him in defence of an innocent meta which brings us to…

Ralph Dibny! Waheeeeeey! An endearing character in the Justice league mythos and Hartley Sawyer is just the goofy-looking weirdo to bring the character to life. His history with Barry is a good conflict and while he is known to break rules, we know he does it for the right reasons, something Barry cops to later since they frequently lock up metas without trial (not to mention those couple guys Barry merced in season 2).

Ralph’s elasticated body is suitably disgusting and gross-looking to emphasise the silly-putty analogy and isn’t too bad considering the TV budget.

Flash Fact: The bottle of Gingold in Ralph’s office is a nod to his comic book origin where that drink is the reason for his elastic abilities.

Overall, a really enjoyable episode, especially after the last couple and hopefully the good times will continue to roll when the ladies of Team Flash and Team Arrow have a Girls Night Out!