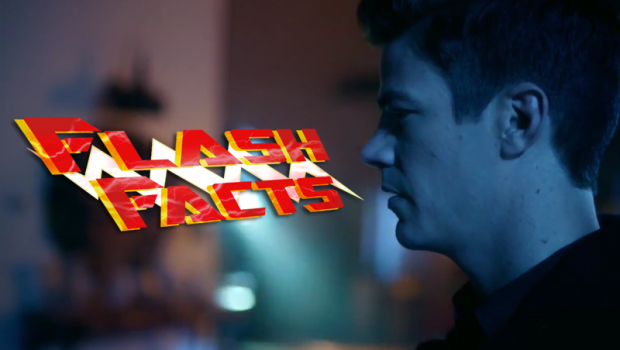 Throughout this season, I’ve lamented privately that The Flash is the weakest it’s been in a while but between Therefore I Am and this episode, I think DeVoe may well be the best villain we’ve had since Season 1!

I mean sure, Zoom was a cool villain in terms of pure dominance of power but Thawne’s cerebral machinations in the first season were really quite engaging and now that we’ve seen DeVoe’s plan play out; I’m confidant in my statement.

There’s a deleted scene available online showing Barry and Iris called back from their honeymoon early after Ralph trips an alarm while trying to find the button for Netflix. I can see why it was cut but Barry and Iris in tropical gear is kinda fun.

Caitlin is kidnapped by Amunet Black, played by Katee Sackhoff with a delightfully, awful British accent. But in a twist, she wants Caitlin, not Frost, to save the life of her latest meta acquisition; Dominic Lanse. More on him later.

We get a little look inside Amunet’s past and it’s hard to tell if she’s gone eccentric with power or if she was always this way. There’s a moment of earnestness when Amunet admits her respect for Caitlin as a doctor. I mean, she also threatens Caitlin’s life but it seemed genuine enough to me.

Meanwhile, Barry is kidnapped by DeVoe and taken to his secret lair! At first, I thought DeVoe was going to transfer his mind into Barry’s body ala Otto Octavius/Spider-Man but it’s not nearly that simple.

In the middle of a Christmas party at the Wests’, Dominic (having been rescued with Caitlin by Cisco and Ralph) arrives to a warm reception, even earning a nickname before Ralph, just as Barry has to leave and deal with an alarm at his apartment. He arrives and doesn’t notice anything really out of the ordinary until he receives a phonecall. From Dominic. It’s at this point the pieces fall into place and DeVoe’s Machiavellian plan comes to fruition.

As revealed in a flashback mid-conversation, Amunet was going to sell Dominic Lanse to DeVoe’s wife because of his formidable telepathic powers. DeVoe uses his chair to transfer his mind into Dominic’s body, which can withstand the rigors of hyper intelligence because of his telepathic ability.

After hearing all this, Barry notices a wedding gift, an ornate knife, he pointed out earlier and a trail of blood. He follows to find the dead body of DeVoe with obvious knife wounds in his chest.

Before Barry can even register the full breadth of what’s happened, Captain Singh kicks in the apartment door. Time slows and Barry contemplates running, it’s what he’s good at afterall, but he sees the pictures of him and Iris and the lightning fades.

It’s an incredibly strong character moment as he chooses to stay, knowing how his father was framed too, and stands his ground because he knows what it’s like to be abandoned.

The episode ends as Barry Allen is arrested and we have to wait until January next year to see how this will play out.

Don’t Run is a suspenseful mid-season finale that really gives us something to dig our teeth into and a plot to look forward to when the show returns and I’m very excited to see the new direction of the show! All of the CW shows have had interesting cliffhangers this year (as of writing, Supergirl has seemingly died and John Constantine has stowed away onboard the Waverider, waiting to see what Arrow has in store) and I can’t wait for these shows to be back in January so, for now, happy holidays and I’ll be back in a flash!