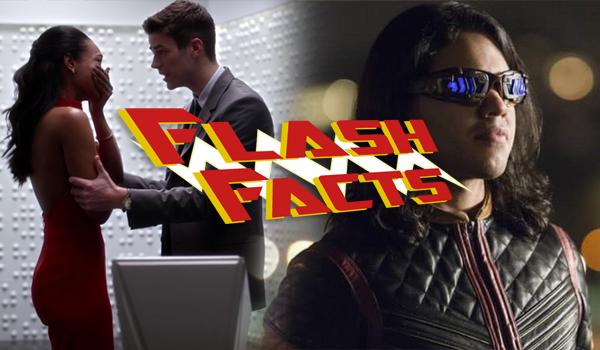 Flash Facts – “Borrowing Problems from the Future” & “Dead or Alive”

Man, I’m getting lax with these…
Seriously, how could I miss the first episode of The Flash back from the Christmas break!? Still, at least Borrowing Problems from the Future is a pretty familiar plot to come back on since it borrows elements from the previous episode; Potential Energy.

It shares the nightmare about the main antagonist, the introduction of a new D-List villain and a surprise arrival in the stinger. It’s leaning super-heavily on these tropes, in fact.

Still this episode does have some great scenes, the major one being Barry revealing what he saw in the future to the team which results in an immensely emotional scene in the Time Vault. Gustin and Patton, ironically, kill it in this scene and really give the scene some much needed gravitas.

Meanwhile, Wally gets his first official collar as Kid Flash, taking down , I mean Plunder. It’s good that we’re finally progressing with Wally’s journey and people have basically stopped giving him shit for wanting to do it.

Julian also returns and accepts Caitlin’s offer to join Team Flash so it’s going to be great to see Tom Felton make funny with the rest of the cast. Spoilers: he fits right in.

We end this episode on the arrival of the gorgeous Jessica Camacho (of the Sleepy Hollow tv show fame), portraying Gypsy and, much like her, we jump straight into the next episode…

Dead or Alive kicks off with shenanigans as Barry and Wally deal with gun runners and Julian is exposed to what an utter shit-show Team Flash is tactically. Also Cisco does a pretty decent British accent!

The two major plot points for this episode are Iris trying to get a story and Cisco protecting HR from Gypsy. To my surprise, Iris’s story is actually compelling! Armed with the knowledge that she won’t die for a few months, she goes full retard and almost gets shot for her troubles but it is nice to see Iris have some agency and act like a badass so I’ll let it slide.

The other is Cisco and Gypsy’s blossoming rivalry/romance! Jessica Camacho is probably the prettiest and most badass guest-hero we’ve had so far, essentially being a veteran version of Cisco, who finally debuts his super-suit in pitch darkness. Boooo! Their fight isn’t very well choreographed (It’s Cisco; he’s a lover, not a fighter) but we do utilise the pair’s vibe abilities and jump around the multiverse like Sliders.

Flash Fact: One of the universes they jump to is Earth-38 and crash through James Olsen’s office at CatCo Media! I hope that gets referenced in the next episode of Supergirl!

Ultimately; HR is saved and Gypsy heads back to Earth-19 with arms full of coffee and a promise that Cisco, and us, will be seeing her again soon. Overall, I preferred Dead or Alive over the previous episode and the idea of more Gypsy has me giddy!

The stinger reveals that Barry, in a good acknowledgement of his own shortcomings (and his recent time fuck-ups), says that the ever-quickening Wally will be the one to save Iris from Savitar. Next time we see that training begin when they face-off against a new meta who is Untouchable.