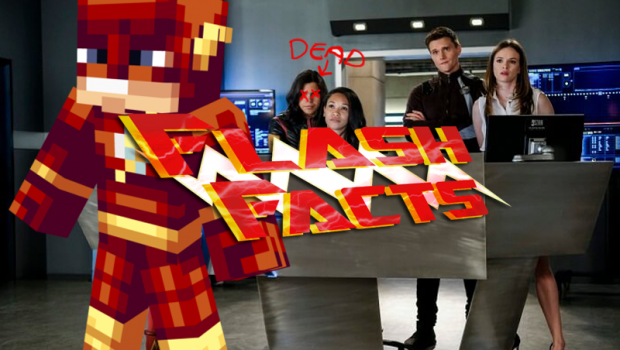 My plans for this review series just aren’t going to plan! So what’s happened in the weeks since the last review? Well, I’ve caught up with all of the CW opening episodes and here’s my quick thoughts! Supergirl remains boring as sin, Legends has a weak opening but it’s got Matthew Ryan as Constantine so I’m in. Arrow has an interesting premise and intriguing flash-forwards, and Black Lightning remains the most consistently good out of all the CW DC shows, not hampered by many of the tropes and trappings of the others.

So what’s been happening with The Flash? Shenanigans, mostly. While they’ve skipped the initial mistrust of Nora, I think Barry and Iris are a little too into being parents to this twenty-something they‘ve just met. Zero-to-sixty with the parenting. It’s awkward but since Nora is still an interesting character, I can put up with it. It’s the kind of development and mentorship we should have had with Wally though…

Cisco is still coming to grips with his break-up with Gypsy, being a curmudgeon and generally having a moan. That’s it. That’s his schtick now. Meanwhile, Caitlin and Ralph are going full-on Mystery, Inc and sleuthing the case of the missing dad which gives them a cool dynamic and adds to the Killer Frost Retrieval Arc. Caitlin finds a supposed suicide note amongst her father’s old notes and by using a cipher, decodes the notes to reveal a message from her father. Kinda hoping that this is Caitlin trying too hard to find a connection and the accumulated grief will see her go full Frost once more but probably not.

It wouldn’t be a season of The Flash without a new incarnation of Harrison Wells and I think I’ve finally reached my limit of Cavanaugh’s numerous characters and garbage accents. It was fun for a while but I think this Sherloque persona is one persona too far. The only semi-meaningful thing that he did was set up some doubt in the audience regarding Nora’s intentions. Like, yeah; obviously she’s hiding something, she’s from the future, there’s all sorts she could be keeping from the team.

And on the villain front, Cicada’s death-count is up to two with the deaths of both meta-jobbers, Gridlock and Block. His hostage situation with Joe reveals a lot about his motivation while Nora talks about his legacy; a metahuman serial killer who is never caught but who has clearly lost his family due to metahumans. It’s an interesting villain, for sure, especially since his lightning bolt dagger can even the playing field by stripping metas of their powers but the swerve with Vibe is a huge mistake in my opinion.

While I don’t want to see Cisco killed, it would definitely make Cicada more of a threat and galvanise the team. It’d make Nora step-up since his early arrival is a result of her actions and Barry wouldn’t be holding her hand as much. Plus this is the second time Cisco has escaped the reaper and he’s definitely got it coming.

Flash Fact: The titles of the first three episodes are a secret message that comes to pass at the end of the third; Nora Blocked The Death of Vibe. Not sure if that’s intentional or not but neat none-the-less.

So Blocked and The Death of Vibe aren’t as good as the opening episode but there’s elements that are just interesting enough to keep me coming back. In comparison, Supergirl is boring as sin and the only thing I’m interested in is the Red Daughter-esque subplot that will hopefully go somewhere. Next time, we’ll see things spin out of control in News Flash.