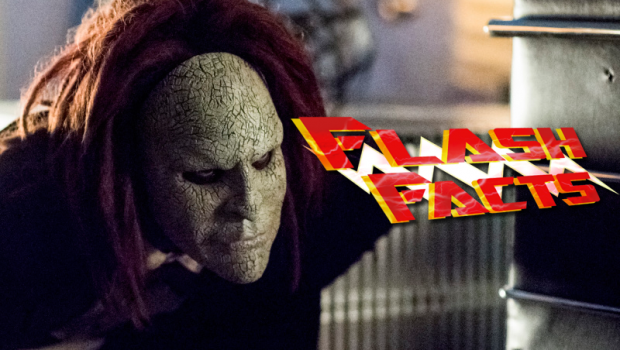 This episode had me cringing and I LOVED it!

All Doll’d Up is a great episode and yes, that’s the bias talking but also my objective thoughts. Everyone was given an equal amount of time to move their personal plots forward while introducing one of my favourite DC Comics villains.

The scenes of Cecile and Nora bounding are pretty funny. I like how Cecile goes full matriarch on the little shit and it made me smile. Nora’s still on her pissy-fit from two weeks ago and Cecile is more than happy to put her to work, all the while dangling the promise of stories about her dad. SWERVE! They were about your mum the whole time! Get dunked on, Nora!

This, along with Iris’s boss-ass leap of faith, leads to Nora and Iris reconciling while a proud Papa Barry watches on. Awww.

Also, this is sweet and I just wanted to point it out because nice things are nice.

Flash Fact: Not just a Flash thing but did anyone else that almost all of the CW shows this week mentioned Gotham City explicitly? Foreshadowing to this year’s crossover? Could be!

I liked Cisco’s section of the plot. Naturally he’s struggling with his place on the team after his powers are effectively neutered so his literal self-redemption arc is a good thing. His behaviour is understandable, hurting ourselves to help those we love, and very relatable. Caitlin finally calls him out on it and he goes on to re-establish the team’s tech advantage by hijacking DeVoe’s dormant satellite network, thus proving he’s still an asset.

Caitlin’s search for her dad is still ongoing and the latest clue is a reference to some goddess and his work indicating that he was fully aware of Cailtlin’s dual personalities. Which I kinda figured out from the previous season’s reveal of babby Frost but hey, we’re getting somewhere!

And finally, we get to Ragdoll and oh man, do I just LOVE me some Ragdoll! An argument could be made that this particular incarnation is an amalgamation of the two Ragdolls, Golden Age Peter Merkel and his son, Peter Merkel Jr; though the latter is the more obvious influence. Sickening snaps and crunches accompany his movements and his hushed but pleasant tone of voice makes him pretty scary.

Ragdoll is a terrifically terrifying villain and the performance is only enhanced by the physical ability of “Twisty” Troy James, an exceptional contortionist known for appearing on Shadowhunters: The Mortal Insturments and America’s Got Talent, and the vocal performance of the legendary Phil Lamarr. I really hope Ragdoll reappears because he’s such a cool villain and the bonus scene released online seems to indicate he’ll be out of prison sooner rather than later.

So yeah, I really liked this episode for a bunch of reasons but the villain really made it for me. Be sure to come back next time as things get a little cooler when The Icicle Cometh.