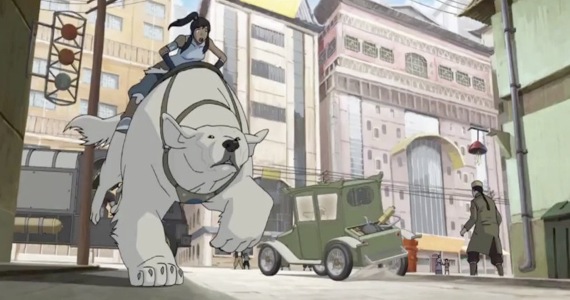 The Legend of Korra is the sequel to the smash hit Avatar: The Last Airbender, set around 70 years after the defeat of Phoenix King Ozai and Princess Azula in the four-part finale of the original show. It follows the adventures of a new Avatar, a Southern Water tribe teenager called Korra, in a new 1920’s style world. It’s set to air on April 14th.

So why does the title of this article say ‘review’? Because the first episode has been leaked online, almost a month before it’s set to premiere. So what’s the verdict? How does this new show stack up to the legendary original series? and it’s nice to have a strong female lead in the show. She’s hot-headed, stubborn, and reckless but also has a great sense of honour, compassion and skill with the three elements she’s already mastered. Oh, yes! We’re starting with an Avatar who already mastered ¾ of the elements in the first episode! This series will obviously focus on how mysticism and older ways mix with new ideas, technology and how Benders treat regular people like second-class citizens. An anit-Benders group, called the Equalists, will be the primary antagonists for the series.

The animation is as fluid and spectacular as it was in the original series and even gives us the little goofy moments that made Aang’s adventure so much fun to follow. The city of… Republic City (Okay, that’s kinda dumb) is a bustling 1920’s metropolis (Think a mix of Shanghai and Manhattan in that period) but still adheres to the same kind of beautiful painted backdrops that once only portrayed tundras and deserts.

The sound design is equally brilliant, from the stoic Eastern influenced tracks at the beginning of the episode to the City’s upbeat swing music.

Janet Varney plays Korra, in her first voice acting role as far as I can tell, and does a fine job, especially alongside JK Simmons who plays her Airbending master uncle, Tenzin. Amon, masked leader of the Equalists, is played by Steve Blum and his second in command is voiced by Lance Frickin’ Henrickson! The rest of the voice cast seems to be made up of relative unknowns or people who haven’t done VO before so it should be interesting to see how they get on.

Legend of Korra’s first episode is available to [legally acquire] from [iTunes] right now or you can wait for a crisp 720p version, as befits the beautiful animation, from April 14th on Nickelodeon.