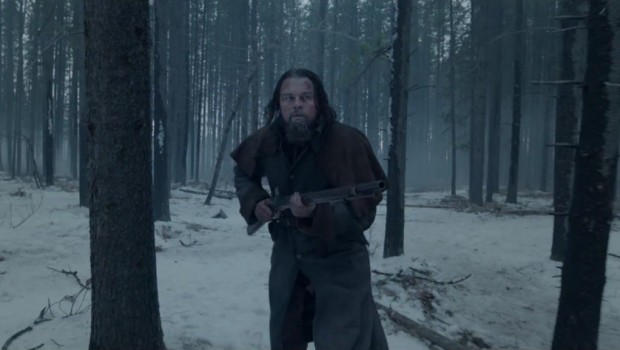 Let me start by emphasizing how much I love a bloodbath. When I come home from a long day in the book industry, I like to relax with a cup of Earl Grey on my left, a tumbler of Old Vine Zin on my right, and someone’s entrails before me. So when I first read of Alejandro González Iñárritu’s difficulties filming his bear mauling survival story in 40 below temperatures with crew defections and a chronically ill yet characteristically sincere Leonardo DiCaprio, I thought, “Goody!” I waited for months, my imagination rife with juicy puncture wounds and necrotic appendages.

Michael Punke’s book far exceeded my expectations. The Revenant is about real life frontiersman Hugh Glass’s struggle to survive despite nigh insurmountable circumstances, all to seek revenge on the scoundrels who left him for dead and took his beloved rifle. Glass is complex and preternaturally capable, a ranger type who would put Strider to shame, and his story is the quintessential American frontier myth. It sings of the bounty and screams of the danger of places that are still wild to this day. The author populates his frontier with scheming, nasty, delicious, self-serving men and men with honor in spite of themselves who must depend on each other in the interest of self-preservation. Punke’s Glass is a learned hero who can fight off wolves for his daily bread yet has a reserve of mercy and tenderness that compels him to conduct himself with honor around those even weaker than himself. Not to imply that he does everything perfectly, how tiresome. His struggles cost him, but he learns from them.

The movie adaptation of The Revenant captures the brutality of an uncompromising yet enticingly fertile landscape. Emmanuel Lubezki’s cinematography has a spinning fishbowl quality that sinks the viewer into a feverish, disoriented empathy with Glass.  Iñárritu’s movie is worth viewing simply for this effect. We are dwarfed by his landscape, gazing up at the treetops from beneath Glass himself, which should thrust us into an intimate journey of survival, white-scarred cheek to bleeding jowl with our hero.

Yet, this movie has no hero. Glass accomplishes nothing out of his own agency; the only reason he has his basic needs met at any point during the film (barring one, admittedly, badass cauterization) is because Iñárritu drops indigenous people in his path like well-placed magic plot devices, simply to save the life of a white man with zero skills. It’s fucking offensive. AND SPOILER ALERT- in one of the most reprehensible filmmaking choices I’ve ever seen, he adds in a fucking rape scene that garners our hero a disposable horse. A convenience rape…let that sink in for a minute. Also, if that actually spoils anything for you, I don’t want to know you. The white occupation of North America resulted in sustained corporate and government sponsored genocide; you don’t get to insult those who suffered by reducing them to mystical figures who either throw your whiny ass liver or exist just as a volley of metonymic and poorly aimed arrows.

What you will find in Punke’s The Revenant:
Barbecued mice
Pirates (I swear to Baby Jesus, there are pirates)
Maggots
Mostly multi-faceted characters
Cannons and drunken revelry
Joy
The most delicious injuries
Change of seasons to indicate the passage of time

What you will find in Iñárritu’s The Revenant:
Magical Indigenous People
Snow
Convenience rape
Snow
One whiny frontiersman with zero survival skills
Snow
A kid, because you wouldn’t care about Iñárritu’s Glass based on his own merits
Snow
Icky French people

Verdict: DiCaprio always rocks, but the book was better.