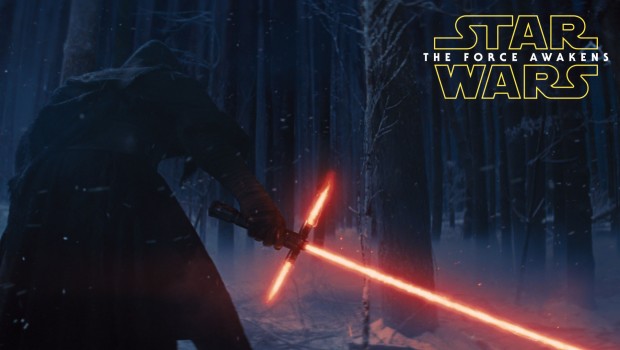 Now that we’ve had 24 hours to calm down (and hopefully get your tickets) lets sit down and talk about the last trailer before the release of Geek Christmas, I mean Star Wars 7.

The Star Wars team have done a really good job at keeping plot points and story info to a minimum. So most of the things I’m going to talk about here are theories and complete guesses. With that in mind…

This is VERY Luke Skywalker ain’t it? Could we be seeing some comparisons and mirroring? Will she also have The Force? This trailer focuses heavily on her. All we know is that her character is called Rey. Rey Skywalker?

Yes, JJ Abrams directed this so yeah, there is a little bit of lens flare. Deal with it.

Our bad guy Kylo Ren (played by Adam Driver) seems really upset over Vader’s death. Is he his kid? IS EVERYONE SOMEONE’S KID?! Wouldn’t that make him Luke’s brother?

Ren’s Dark Side© Force powers look like they could work on the mind? Will Ren be brainwashing folks? Is that why John Boyega looks funny at Oscar Isaac later? Is it because Oscar Isaac is secretly his dad?

It seems like Han and Chewie have a bigger role in this film than most of us would have expected (or at least they’re featured a lot in the trailer) which is pretty cool. Also, it’s a nice character arc to show how Han, previously a non-believer in the force, now speaks in reverence towards it.

I can’t wait to see Chewie’s child show up.

This is just nice to see. Although Leia looks worried. Probably about her kid/kids. EVERYBODY’S KIDS ARE IN THIS.

There are few things in life as sumptuous as John Boyega’s “oh shit” face. Wait until he finds out that Luke/Jabba/R2D2 is his dad!

Overall: Have you bought your ticket yet?

Tags: everyone is someone else's kid, kids, star wars