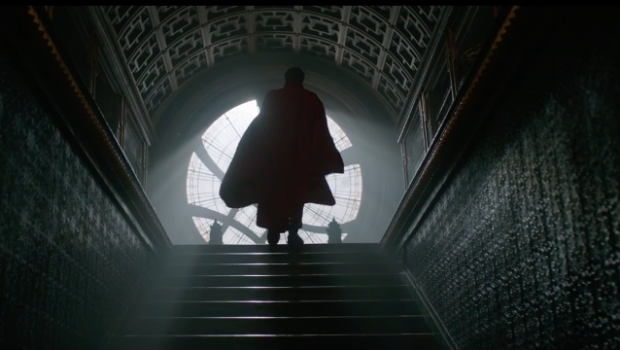 If there’s something strange in the neighbourhood who you gonna call? Why, the doctor, of course!

If you put aside the problematic “white saviour” motif in Doctor Strange’s story, and admittedly I’m asking you to put a pretty big issue aside, the creation of this project has been great. Benedict Cumberbatch’s casting is a great fit for the comic book character. A wonderful cast surrounds him with Rachel McAdams, Mads Mikkelsen, Tilda Swinton, and Chiwetel Ejiofor. Everything looks great, right?

Sure, but only if you forget that the very idea of a white man traveling to Asia to learn their secrets and ending up the most skilled person in their dark arts is all kinds of bad. But, and here’s the crux of when things become complicated, Marvel are trying to keep loyal to its source material (which as we all know is why their films have done better than any other comic book ones). That’s great. When the source material has racist undertones, that’s not great. But they have to stay true, right? Well, they changed The Mandarin in Iron Man 3 because of racist undertones, so why can’t they do it now? Oh, it works better for you when you remove an Asian actor rather than add one? Ok, I see how it is.

Anyway, long story short, my excitement for this movie is conflicted a little. You should probably know that before you hear my thoughts on the trailer…

This shows Stephen scrubbing up before surgery but his hand movements are a nice little nod to his conjuring hands from the comics. You’ll recognise its similarity to how Wanda moved her hands in Avengers: Age of Ultron.

If you’re not aware of Strange’s backstory, to quote Yoda, you will be. But for now, I’ll tell you that the car crash at the start of the trailer ruins his hands and he can never do surgery again. Lots of visuals regarding that in this trailer and to be honest it’s the least interesting part of Strange’s story so to see them lean so heavily on it here is disappointing.

Tilda Swinton’s Ancient One allows us to see how they’re going to show a very big part of Strange’s power, him stepping out of his corporeal form. I have to say, it looks pretty good. A lot better than the dodgy fake beard Cumberbatch is sporting.

If you’ve ever read a Doctor Strange comic then you’ll know that most of what his adventures consist of is mind-bending visuals and head-f%$@ing ideas. It’s nice to see they’re not going to scrimp in that regard when it comes to the movie. Hopefully, some kids will come out of the cinema wanting to expand their horizons.

Overall: I’m not particularly impressed by what I see in this trailer, which is the very definition of the term teaser. It mainly consists of footage from before anything would really happen in the movie (i.e. before he becomes the hero) and that doesn’t really interest me. Plus, I literally laughed out loud when I heard Cumberbatch’s American accent. He sounds like Doctor House who, by the way, is another Englishman doing a dodgy American accent.