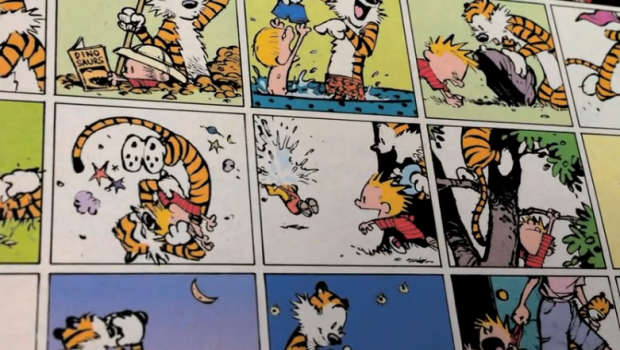 Calvin & Hobbes is one of the most universally loved pieces of literature in the world. It’s creator, Bill Watterson, is an intensely private man and has done very, very few interviews in his life. Less so since he retired the comic 18 years ago. With all that in mind, can director Joel Allen Schroeder shed some light on the strip with his documentary?

You’ll see in the following full-length trailer that at the very least he had no shortage of people looking to talk about it. From actors and fellow cartoonists to regular fanatics it appears everybody is chomping at the bit to gush about this seminal work.

Unlike most TMBs here at DOOM Towers we can’t exactly pick this apart for nuggets of info. It’s a documentary full of people talking to camera, what’s to say? But there are a couple points.

– Beauty is in the eye of the director

So this is one of those documentaries where the director inserts themselves physically into the film. We’ll be seeing Joel as he meets fans and looks into the history of the comic. This can be a slippery slope for documentaries as sometimes the director can end up making the film all about himself. When the subject matter is this good, that isn’t necessary/wanted.

– Whatever they say, believe it

I can’t stress this enough; whatever superlative they use to describe Calvin & Hobbes, whatever praise they pour onto it, it’s all true. You can not over emphasize how wonderful the comic is. If you haven’t read it yet, stop reading this article now and go do so. In fact, even if you have read it before, go back and read it again. And just in case you don’t listen, I’m going to stop this article right now so you’ve no excuse.