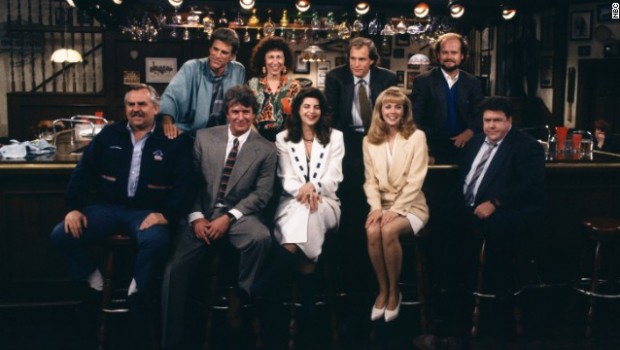 Cheers is the first real grown-up show I’m featuring here but I don’t think any list of TV show theme tunes could be complete without this belter.

Cheers ran for 11 seasons and started off slowly (it had terrible ratings for the first year) but gained such momentum that it became a regular staple of television schedules. Decades after it’s end, Cheers is still very watchable and barely aged at all apart from the fashion and the odd sports reference. The theme tune also has the same staying power with lyrics that still resonate now.

While the tune is a lilting melody that turns into a barn storming crowd-participation-friendly sing-a-long lets not forget that making your way in the world today really does take everything you’ve got. Taking a break from all your troubles really would help a lot. It’s not just nice lyrics, IT’S THE TRUTH. If you’ve ever been drunk in a pub with your friends and someone mentions this song try, I said TRY, not to sing this thing from start to finish at the top of your lungs. You can’t and you know why? Because it speaks to the very depths of your soul. So if you do manage not to sing along, you officially have no soul. Don’t blame me for giving you this news, I don’t make the rules I just inform you of them.

Having this at the start of your show made people care whether or not Sam got with Rebecca or care about Norm’s terrible marriage to his wife or care about Woody’s obvious retardation because they knew your name god damn it! And they serve you alcohol.

As an extra bonus, check out the full version below. It’s twice as long but also has some slightly crazier lyrics that were probably better off never making it to air.