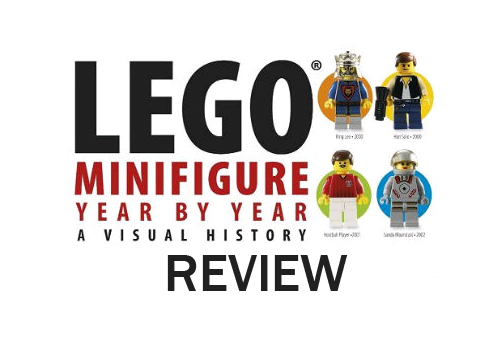 We’re finishing up our LEGO book double-bill with a book that was released a little over a month ago. This is LEGO Minifigure Year by Year: A Visual History. Unlike the Character Encyclopedia we took a look at, this book is less focused on the character of the Minifigures and is more in line with other reference books that Dorling Kindersley is known for. It’s a pretty hefty beast, being much larger in all dimensions than the previous books. It won’t even fit on my shelves! This 255-page behemoth covers so much that I can barely think where to begin but why not follow the formula that works and check out the Minifigures! That’s right, Minifigures, plural! Unlike most DK books, which only come with one Minifigure, this one comes with three! I believe the idea was to pick out three well known “iconic” Minifigures. As such, we are treated to a Townsperson, a Robber and a Stormtrooper. The Townsperson is the very definition of generic, sporting a plain red body and the iconic, yet strangely vacant, smiley face that was the standard for at least a decade. The Robber is a neat little Minifig, one that only debuted last year in a City theme set.  The Stormtrooper is also from 2012 as it is the latest redesign for a Minifigure that’s been around since 2001. 12 years is a long time to be around so I can understand his inclusion here. The book itself does exactly what it says on the tin, following a linear year by year retrospective from 1978 to the early part of this year. The sheer volume of information and images in this book is astounding. I can only guess that the author, Daniel Lipkowitz, was either doing this for a year straight or had a time of researchers helping. I couldn’t sit down with this and abosrob all the information in one sitting, it was three or four. While the digest-sized Character Encyclopedia could be skimmed through in a night, this is a much bigger commitment. One thing that I couldn’t escape from while reading was the waves upon waves of nostalgia that I felt as I flicked through the pages and smiled at Minifigs from my childhood. Ice Planet 2002, Aquanauts, Extreme Team, and the earliest LEGO Star Wars sets. All of them were a big part of my childhood and it makes me smile to see them again. Early in the book, they state outright that some LEGO figs do not count as Minifigures and won’t be covered but I guess they changed their minds because the recent MiniDolls of the Friends theme still get covered a little. And I’m happy to report that the Team GB minifigures get a look in too! LEGO Minifigure Year by Year: A Visual History is a nostalgic thrillride and a perfect coffee table book (because it won’t fit on your shelf!) for any LEGO fan, toy collector, pop culture buffs and even kids. At £25.00 RRP, it may seem steep but it’s worth every penny!

I’d like to take a moment to thank Dorling Kindersley for the opportunity to review these books and recommend you head over to their website, where you can currently get this book for 30% off, and check out the rest of their range!