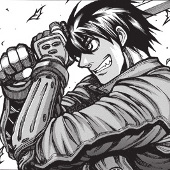 Jack of All Trades’ first manga review, along with a series inspired by the tradition and styles of Japanese comics, beginning with the follow up to Kouta Hirano’s breakout series Hellsing, and following up with the revamping of a popular indie series courtesy of that mystic northern land known as…Canada. Mangaka Kouta Hirano is best known for his series Hellsing, an ultraviolent supernatural action manga about a clandestine English organization dedicated to fighting vampires — you know, before the sparkly variety took the fore in teenybopper soap operas, when vampires were actual goddamned monsters. Following up that popular series, Hirano took a left turn at the genre crossroads, exchanging the supernatural for historical fiction dosed with a heavy pinch of sword-and-sorcery fantasy. Drifters introduces us to a world where earth’s most famous, or notorious, historical figures are abducted moments before death and employed in an ongoing war between two mystical forces vying over a fantasy kingdom inhabited by elves, orcs, and trolls. A far cry from the Nazi vampires of Hellsing yet no less action-packed, bloody, and coated with Hirano’s trademark goofball humor.

In the first volume of Drifters, we met time-displaced historical figures Shimazu Toyohisa, legendary warlord Oda Nobunaga, and Nasu no Yoichi. Those unfamiliar with Japanese history need not fear; their identities and historical relevance unravel in short snippets of dialogue (though any passing fan of anime or Japanese culture will no doubt recognize the name Nobunaga). Hirano cares more for the legend of these characters rather than their literal historical relevance or factual biographies. The same carries for his depiction of notable Western figures like Hannibal, Roman general Scipio Africanus, the Wild Bunch, and Jeanne d’Arc. PREVIOUSLY, ON DRIFTERS: Japanese warrior Toyohisa, upon the moment of his historical death at Uto Hill in the Battle of Sekigahara, finds himself transported via a magical doorway to an otherworldly realm inhabited by strange races and imperialistic humans in Western garb. Finding himself in the company of the legendary Oda Nobunaga and the enigmatic (and androgynous) Yoichi, Toyohisa soon learns that he is a “Drifter” in this universe, a human pulled from our earth by a mysterious being to be used as warriors against the forces of the Black King. The Black King wages a war of conquest and absolute destruction for any and all human beings, waging war with his “Ends”, similarly time-displaced historical figures who have been bent and twisted by their past into super-powered monsters.

With all the players in motion, this volume puts aside setup and dives straight into the action as Drifters Nobunaga, Toyohisa, Yoichi, and agent of the Magicians’ Guild Olminu aim at forming their own army in opposition to the Black King’s as well as the conquering empire of Orte. With no true warriors unallied to any nation or superpower to be found, Nobunaga reckons they’ll just have to create some new ones. With that, they descend upon a small village of elves, despondent serfs of the province’s duke. Then, Toyohisa does what he does best: embroiling the spirits of the weak into pyres of righteous anger, and soon our heroes have a contingent of archers lusting of the blood of their oppressors.

On premise alone, this series seems doomed to failure. The elements at play here are just too disparate and contradictory. Either write historical fiction or write fantasy. Sure, Nazi vampires work perfectly for the B-movie action schlock Hirano clearly gravitates toward but this is just too out there of a premise. But Hirano pulls it off with spectacular, ridiculous flare. Once you see the Wild Bunch firing a Civil War-era, hand-cranked Gatling gun into an oncoming army of orcs, one can’t help but nod with approval and say, “You’ve done it again, sir.”

Drifters works best when it’s at its most bombastic and outlandish. And, thankfully, those moments come…well, actually they never stop. A scene never passes without some level of bombast streaking across the page, whether it’s the characters screaming into each other’s faces, butting heads over their clashing backgrounds or approaches to tactics, or the action scenes which systematically set out to top each other every time. Hirano makes no pretense about writing high drama or crafting nuanced characters. Naturally, every character makes up for their lack of depth with bombast and lunacy. Nobunaga, especially, stands out as the magnificent bastard of the group while Toyohisa, the more traditional, straight-laced hero type, avoids the boring, blasé trap that similar characters often fall into — mostly by being the most badass warrior to ever grace Japan. Chopping down a tree with a single sword swipe not part of your regular exercise routine? Pussy! And Yoichi…Yoichi like the creep factor, using his very feminine appearance to give his teammates the heebies. His scene training a group of elves at archery

This is a series that turns the dial to eleven, letting up only to lull the reader into a false sense of security. Think you’ve got a grip on what this series is all about? Fuck you! Japanese fighter plane mowing down mounted dragon cavalry! In keeping with its standard manga publications, Dark Horse released this volume in standard 5” x 7 ¼” format unlike the higher quality oversized releases you get with Viz, especially those under its Signature imprint. The cheaper paper stock also dilutes the inking, rendering blacks dingy while the white of the paper fails to stand out as well as it should. As a result, Hirano’s more intricate penciling can look muddied. A shame given Hirano’s impressive penciling, at its best after sharp refinement in the latter volumes of Hellsing.

Nevertheless, Drifters remains an exciting, action-packed series with a lot of character, moments of awesome, and fantastic artwork if, albeit, published in an admitted disposable format. Any fan of the lavishly ludicrous narratives comic books can offer need to read this series. There are just too many moments of insane awesomeness to pass it up. Scott Pilgrim, following the criminally underappreciated film adaptation by Edgar Wright, sees a second life with the release of hardbound, colorized editions of the original comic series. Previously published in Manga-style digest format in black and white, the Color Edition expands the page format by an inch in either dimension while colorist Nathan Fairbairn fills in the gaps.

Unlike most manga that makes it over to the West, author Bryan Lee O’Malley thankfully eschews most of the tropes of the shonen fight manga that get the most attention from publishers. Most…but certainly not all. In fact, that’s part of what makes Scott Pilgrim a breath of fresh air for a genre grown stale and homogeneous; you’re not liable to find the depth of character and theme in Naruto or Bleach that you’ll find in Scott Pilgrim. It’s all the lunatic fight sequences you expect from Dragon Ball Z but with all the character and charm sorely missing from those books.

For the uninitiated, our story begins in the far off land of Canada — Toronto, to be exact — where Scott Pilgrim is dating a high school girl. The age difference only makes this kinda creepy and Scott’s complete inability to initiate anything more…intimate with Knives Chau, the high schooler in question, makes the “relationship” all the more pathetic and sad, at least in the eyes of Scott’s bandmates and friends. Things get complicated when Scott starts dreaming of a strange-haired girl on roller blades and even more complicated when he meets said girl in real life, growing instantaneously infatuated with her. Ramona Flowers, the girl of Scott’s dreams (see what they did there?), just moved to Toronto and, like Scott, is coming off a bad breakup. Worse, unbeknownst to Scott or Ramona herself (you should really read your emails more thoroughly, Scott), the lass carries a stable of Seven Evil Exes hell-bent on ruining any new romance Ramona may find…and heaven help Scott when she finally gives him a glance.

Even early on, the themes that will define Scott Pilgrim begin to emerge. Primarily, Scott stands as the epitome of any twenty-something young adult growing well beyond adolescence yet repeatedly failing to mature in any real sense. Scott doesn’t have a job, his friends look down on him, his relationships are pitiful, and, in general, Scott isn’t the most likeable of protagonists. He’s thick in the head, a bit callous (though never malicious…most of the time), and has a hard time of facing the consequences of his own actions. The full nature of his character won’t emerge until later volumes, so Scott comes off a bit more likeable here: an underdog down on his luck, looking for simple escapes from the madhouse that is…normal life.

The larger format and the coloring are well worth purchasing the series all over again. The coloring doesn’t elevate the art into the upper strata but, more importantly, complements O’Malley’s simplistic art style. Colorist Nathan Fairbairn opts for more realistic, muted shades early on, though as the plot becomes ever more fantastical and outlandish, the brighter, blooming shades come out, especially with the debut Evil Ex battle. But most of all, the coloring helps distinguish characters with greater ease — O’Malley’s art style gives all his characters similar kidney bean heads, making distinguishing similar looking character difficult in the original black and white books. As well, the inking is a lot cleaner compared to the original volume and certain backgrounds have been cleaned up and given more splashes of detail. Faults in the artwork generally stem from O’Malley’s lack of refinement in the early stages of the series, lacking the energy and punch of the pictures, panels, and layouts you’ll find in later on, as well as a few instances of off-model characters and wonky expressions.

Currently available in hardcover, the book comes in library binding format with the front and reverse covers printed directly onto the hardback rather than the dust jacket format of most hardcover releases. This is a minor quibble and the book doesn’t suffer for it — personally, I prefer the dignity and regality a dust jacket brings but, then again, “regal” and “dignified” don’t exactly describe Scott Pilgrim. Pages are printed on high quality pulp paper stock rather than glossy, giving the inking and coloring a more organic feel as well as tying the book to its digest format roots. The book also comes with a good amount of extras, including an afterword by O’Malley, sketch galleries, and various bits, bobs, and ephemera. Scott Pilgrim is perhaps one of the most noteworthy comics to emerge in the past decade, and I don’t make that statement lightly. In the same way that Edgar Wright’s comedies set a high standard for all other comedies, Scott Pilgrim set the bar for indie comics and what they should aim to achieve. The sad fact is you don’t find nearly as much thoughtfulness or craftsmanship of narrative in most comic books as you do in Scott Pilgrim. Here, every character walks away likeable and distinct in their own way, they experience arcs and exit a different person than when they entered. Suffice it to say, if you haven’t experienced this series yet, go. Find it. Love it. You’ll not be disappointed.