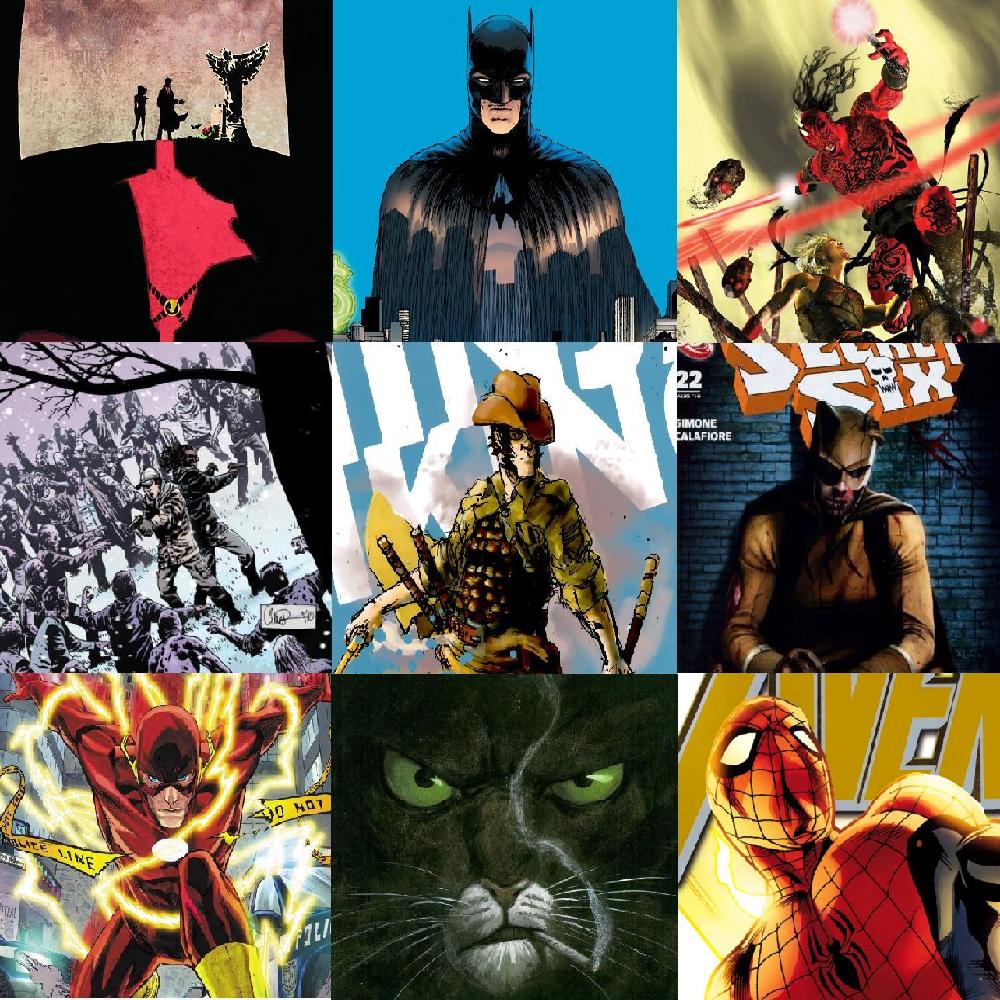 Firstly, I’d like to address a few issues.
– I’ve missed quite a few weeks and its because of school. Sorry.
– I’m going to change a bit about the format of this article because honestly, its difficult to write nearly 1000 words on comic books and not seem either 1) too verbose in some way or 2) like I’m sort changing the subject by writing too little on a specific matter.
– Happy New Year!

With that said, this article is going to be my comic book year-in-review. Keep in mind that I am a college student of limited means and I can’t buy everything that I’d like to, also, I am in no means a professional on any comic, just an avid fan who is opinionated about what he likes. However, I do read quite a lot and I am quite proud of this.

Before I list the ongoing series of the year, I’m going to make a special note for Scott Pilgrim’s Finest Hour which was a perfect end to a series that has been great for the past few years. I don’t know how it would fit into this comic book world, as a manga/graphic novel/single issue/trade or what have you, I just know that it was good and that I loved it. That being said…

Top 10 Ongoing Series of the Year:

What can I say about CNV that I haven’t already said? Its fun, its pretty, and its damn fine comics. I’m sad that the comic is currently on an extended hiatus at 10 issues, but the preview at the end of issue 10 was enough to make me excited for its eventual (*fingers crossed*) return.

Yes, its Grant Morrison, and yes, I had problems with it, but I also know that this was a very solid series since its start in August Last year all the way up until Morrison stopped writing 2 issues ago. Quietly’s art for the first 3 issues and 16 covers was beautiful. The story had its eccentricities, but established Damien Wayne as a loveable character and set up Dick as his own Batman. The villains were interesting, eccentric, and utterly mad which is expected from Morrison and despite my dislike of Professor Pyg (because he’s just too damn creepy) and John Hurt (because Morrison seemed to force him on the reader) I quite enjoyed the story. The only criticism of the conclusion that I have is that it felt very rushed, with everything being tied up a little unsatisfactorily and that Frazer Irving’s art was a strange choice and I could never quite decide if I liked it or not. I have no idea what Paul Cornell is doing but I hope the comic gets back in form soon.

I love the art on this book more than anything since J.H. Williams III ended his run on Detective Comics at the end of 2009. Manapul can draw the hell out of The Flash and his action sequences are inspired. Johns clearly loves Barry Allen and The Flash and despite my never being a big fan of the character, I found myself desperately wanting to read more at the end of every issue.

Jonathan Hickman has done some amazing things with the Fantastic Four universe since the start of his run, mainly make me care about it. Hickman took over the comic with issue #570 and kinda went crazy with the story. Reed Richards was re-invigorated as a man who has to and wants to solve every problem ever. Richards creates a machine to do just that and creates some mad world with the many versions of himself over the different dimensions who have all done the same thing. All of them come together to solve every problem in the multi-verse. Along with this crazy wonderfulness, there are stories to do with the Inhumans, a race older than man, Nathaniel Richards rise and return, Reed Richards’ school for super-geniuses, and of course the current storylines of Ben Grimm being partially cured and one of the four meeting a terrible end. I recommend that everyone picks this up, its been 16 comics full of just great stories that see the true potential that comics have to imagine worlds.

Bendis isn’t perfect, of this I am completely aware. Secret Invasion was unsatisfying, Dark Reign was messy, and Siege wasn’t much of anything, so going into a new series, I wasn’t entirely confident that it was going to be a high quality work. I was pleasantly surprised at what has become a great comic. Starting with a fresh team in the wake of Siege, Bendis strayed from his long running story arcs to create a new conflict. Vague hints at a cataclysmic future and errors in the time stream made up the main conflict of the series. Good characterization, amazing splash pages, and subtle plots made it easily one of the best reads last year.

The only thing that makes this book better than the main Avengers series is that Bendis seems to be trying to have more fun with this series whereas the other series is apparently more about advancing an epic Marvel storyline into existence.

If rated as an overall comic, The Walking Dead would be number 1 on this list, but from just this year, I have to knock it back a few places. Kirkman keeps the story intense and brutal, and just when you think that you have it figured out, he finds a way to make everything change.

I had little idea of what this book would be but I knew that I would like it from the simple fact that it was Tim Drake as the star. Tim has long been my favorite Robin because he was the one who wanted it most, he was the one who was most similar to Bruce and he was constantly striving to be worthy of the position. He isn’t fully capable at this point, but he is the most suited to taking up Batman’s mantle once it became necessary for him to do so. This book started with Tim’s desperate search for proof that Bruce Wayne was not dead following the events of Final Crisis. He was on a quest to save him and bring him back against the world who thought it was a lost cause. Yost has a perfect idea of who Tim is as a character and the struggles he has to find his identity as a hero when he’s competing with the new factor of Damien and living in the shadow of both Dick and the returned Jason Todd. Nicieza has been doing well with the character but I’m not as much of a fan of his focus on the relationships as opposed to the hero. Art-wise, Marcus To is the only person I ever want drawing Tim Drake. Most other artists try to make him older or younger to the point that he blends into the crowd, he’s a teenager and he should look like a teenager. All-in-all, its been a wonderful book and consistently strong.

Taking place in the far future of the Star Wars universe, Legacy supposed a universe after Luke Skywalker and Han Solo are long gone in which the Sith have returned and have won the galaxy. I absolutely love what this comic has done for Star Wars. The novels of recent years have been very much lacking and Ostrander and Duursema have created a new world, a new universe for my favorite stories to take place. Each issue over the past year (44-50, and Legacy: War #1) has been packed with fluid story, fun concepts, and great characterization. Duursema’s art is continually improving as he packs more dynamic action and more detail into each panel and Ostrander clearly loved each of the characters as there is no wasted dialogue and no narrative that isn’t necessary. If nothing else, the comic made me excited each and every time I read it, I was excited that there was a Skywalker to root for in the future, I was excited that we could move 200 years into the future and still have a mysterious universe and I was excited that the universe is still going strong.

Continuing from a continuing series started back when in November ’08 and going very strong since then, Secret Six is my favorite comic of the year. It has been utterly enjoyable every issue with incredibly writing by Simone and some pretty brutal art to accompany it by Calafiore. The idea for this series began back in 2006-2007 with a Secret Six miniseries. It created the idea of 6 b-list villains teaming up as a mercenary squad for hire. This year started out with issue 15, a one-shot story by John Ostrander about Deadshot (who I’ve grown to love over the course of reading Secret Six) and continued with tie-ins to Blackest Night, and quite a few stories about this new team versus Amanda Waller’s Suicide Squad. Every issue is packed with great character and identity and some of the most intense action that you’ll see outside of Invincible. Simone continues to pump out demented sequences with hate and love-able (at the same time) characters.

I wish I had read more this year, but my exposure was limited to X’ed Out, Duncan the Wonder Dog, Parker: The Outfit, Afrodisiac, The Amazing Screw-On Head and Other Curious Objects, and Blacksad. Blacksad stands out among those as a work of beauty. Its kind of impossible for me to describe it well enough in this small space but imagine if someone did a violent Maus-esque version of Casablanca. The comic is all drawn in watercolor and while the translation from French could have been awkward, it comes across as poetic and full of depth.

There are so many books that I wish I could’ve put on this list. S.H.I.E.L.D. has been amazing but its only a handful of issues old, the same applies to Morning Glories, Scarlet, Uncanny X-Force, Young Avengers: The Children’s Crusade, and Atomic Robo (which suffers from the fate of not being nearly consistent enough). A few comic books that I wish I’d either given more of a chance or had enough money to risk like Daytripper, Chew, Stumptown, Wolverine, Sweet Tooth, Ex Machina (I’m reading the trades), Unknown Soldier and Northlanders. There are a few comics that I desperately wish were better than they were. Brightest Day has been lackluster, most of the main Batman books haven’t been nearly as good as they could have been, Green Lantern has been steadily getting lazier, and my beloved Star Wars books seem to be running out of ideas.

2010 was a better year for the idea of comic books than for the comic book itself. We have Scott Pilgrim, Green Lantern, The Walking Dead, and plenty of other comic book ideas becoming wonderfully accepted into popular culture. If this trend continues, maybe I’ll be able to read my comics in public without snickers from every direction.