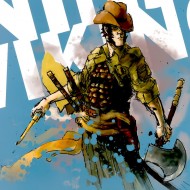 The plate for this week is filled with a multiple personality infested comic that entertains me to no end (this is untrue; there might be an end but I haven’t found it yet). I also attempt to use the word “personality” more times per paragraph than has ever been done before.

WARNING: Spoilers for Cowboy Ninja Viking follow! If you want to read this on your own, please do so before continuing on. I picked up the first issue of Cowboy Ninja Viking (written by AJ Lieberman, art and tones by Riley Rossmo) back in October last year based solely on the name and the cover. Upon reading, and with further issues, I have been more than pleasantly surprised with the story, humor, and character work in the series.

The story starts out, as stories are well-known for doing, with a tense standoff on a rooftop wherein our titular character (given name: Duncan) faces off against a group of agents, including his future love interest Sara Nix, who are working at the behest of Dr. Sebastian Ghislain. The standoff was brought about because a secret government project that had included Duncan and had been buried five years earlier has been brought back to light by a shadowy adversary and Dr. Ghislain needs Duncan’s help in order to stop him from making the world a more unpleasant place.

The “triplets” program, as it is named in the story, is the project in which Duncan was a participant. The program took people with multiple personality disorder, and as Ghislain explains: “We used experimental regression therapies, pharmacological enhancements, and attempted to train the group to retain the skills of your latent personalities.” In more plain language, they took individuals who had three distinct alternate personalities and trained those personalities to have certain skills associated with a profession in order to make highly effective and dangerous assassins, or “triplet”. This is where the comic book suspension of belief comes in.

It is hard enough to accept that a single alternate personality could house skills that could be useful, let alone applicable to black ops work, but that three personalities could be given unique profession-related abilities. As the book progresses, more of these “triplets” are introduced, but most, if not all of them, have at least one personality that would be completely useless in an assassin and are mostly put into the book for comedic purposes. The other triplet introduced in the first book is Yashitiko Ammo whose triplet personalities are a Pirate, Gladiator, and Oceanographer. These useless personalities are the source of most of the funny dialogue in the book. However, one of the big problems I have with the series is that when triplets are having a conversation with one another it gets confusing as to whom exactly is talking. Each persona in a triplet is represented by a symbol attached to their speech bubbles (i.e. Cowboy has a six shooter, Ninja has a katana, and Viking has a two-sided battle ax) but there are quite a few personas that are similar and therefore hard to distinguish. Also, there are a few personas that are not readily identifiable (as with Cowboy or Ninja) because either the symbol is vague (as with the Navy Seal persona which is represented by a pair of goggles) in or their appearance (as with the Demolitions Expert/Amish Guy/WWII Veteran looking a lot like the Hitman/Navy Seal/Roadie).

Aside from the few problems that I have with character differentiation and a few issues that plague most comics, like why the team flew to Switzerland, had a dramatic parachute drop only to leave for France three panels later because they forgot something, the story is very well written with storylines and character motivations being fairly solid. There are a few serious moments that don’t seem out of place in the overtly absurd world of the triplets, such as Duncan’s life saving efforts in issue two and the conversation between Duncan and Gary in issue four. The story has gotten a little hard to follow by issue eight, because there is a dramatic change in the conflict of the story, but it’s easy enough to follow that you can pick up any issue and not be so far out of your element as to not enjoy the read. Some of the dialogue does tend to get a bit bizarre as Lieberman looks for a joke anywhere he can find it: “You’re f**king me like a figure-skater trying to convince his wife he’s not gay.” I don’t know what that even means. Seriously, is that a good or a bad thing? The surrounding dialogue gives no help as to the context.

This transitions me awkwardly to the art. Rossmo is not going for photorealism here, but he has a distinct style that I quite like: black and white inks with a bit of dot shading and colored tones over most the page. The inks are gritty and the backgrounds are sparse, but there is a lot of work put into panels where there is more action or that there is something important to see so you really don’t miss out on much. Outside of the small amount of confusion that I mentioned earlier, it’s a fantastic job of visualizing the different triplets, each with their unique styles and eccentricities. Also, there was a definite color scheme that they kept for each of the first five issues. Whether this was due to budget, a deliberate move by Rossmo or that just being the way it worked out, I don’t know but it works to keep each “episode” of the story unified. From issue six on, where the direction of the story changes, more color per issue is introduced and more work seemed to go into the page layouts. I’m willing to accept the little maybe mistakes that I see in the comic, like proportions being crazy sometimes and the action looking a little stiff where it could be much more dynamic, but I really have little to complain about.

The series is now on issue number nine and I won’t reveal what’s going on exactly, but I can say that its more of the same crazy (literally) fun. All in all, this series is an incredibly fun read and I would absolutely recommend it for someone looking for something fresh to pick up (for $3.99 an issue). Cowboy Ninja Viking has been one of my most looked-forward-to comics and its one of the few comics I read that always puts a smile on my face (the others being Secret Six and The Walking Dead). Kudos Mr. Lieberman, kudos Mr. Rossmo. You’ve made me a very happy 22 year old.

I’ve read other reviews of this series where there were more complains but they seemed to have a pre-conceived notion of what the characters and story should be before they read it, which is well and fine for an established character like Spider-Man but entirely unfounded for a new series. One particularly irate reviewer called it “contrived” and went on to complain that the story arc of the first five issues of an ongoing series left the series as relatively unchanged.

First, I have to define contrived for him:

Now, contrived seems to be a popular word for reviewers, but does it make sense in this case. I know what he’s trying to say, that the conflict was manufactured and did not seem to flow out of a natural sort of progression. However, THIS IS A COMIC BOOK ABOUT MULTIPLE PERSONALITY ASSASSINS and THE TITLE OF THE BOOK IS COWBOY NINJA VIKING. Sometimes, I just gotta shake my head and wonder why the hell some reviewers even read comic books. They never seem to be able to just read a comic book and have fun reading it. Because it’s their job now, they analyze every aspect of it to death and create this world where their approval of a comic is dependent on an judgement that would make them respected rather than citing any real opinions that they might have. I love this stupid humor, I love this over the top story, and I still love comic books.