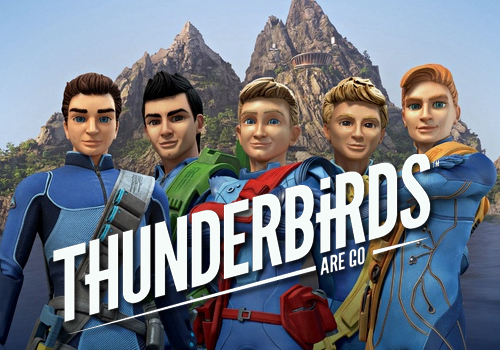 Tease Me, Baby! – Thunderbirds Are Go!

The Boys are back in town for their 50th Anniversary!

Gerry Anderson was a visionary and his shows were a staple of my childhood so when I heard they were reviving Thunderbirds after their decades-long slumber, I was excited! A year or so later, we finally have the first trailer for the new show Thunderbirds Are Go! Here’s the synopsis and trailer!

The world of 2060 is a dangerous place. Technology may have advanced in leaps and bounds, but disasters can arise and lives put at risk. Thankfully there is hope. Operating from their hidden base on a remote island somewhere in the south Pacific, the five heroic Tracy Brothers and their remarkable, cutting-edge crafts are ready and willing to help those in need; from the depths of the oceans, to the furthest reaches of space. The trailer opens up with Thunderbird 5 in orbit relaying a variety of distress calls to Tracey Island. One of the things that interested me about this show was the mix of live action model sets and CGI and the involvement of the WETA Workshop, who really know their stuff when it comes to modelling and prop-making. Check out this video for a more detailed look at the modelled world. The redesigns of the Thunderbird vehicles, while not as extreme as the live-action movies, are still modern and sleek compared to their predecessors but still faithful enough to induce nostalgia. You only see Thunderbirds 1 and 2 fully in this trailer but the other designs are top notch and I can’t wait to see redesigns for the other classic vehicles; such as The Mole or Firefly. Word is that we’ll be seeing recreations of many of the famous Thunderbirds stories of old as well as new stuff and the brief flashes we see of this emergencies look pretty spectacular!

The Man in Shadow The Hood (voiced by Andres Williams) is the Tracy’s main arch-nemesis and responsible for many of the disasters they respond to. I don’t know if he did it before but he’s seems to be openly antagonising the Tracy’s in this trailer, which should lead to an interesting dynamic.

Birds of a Feather The Tracy brothers are the core protagonists and will be joined by the usual cast of allies including Lady Penelope and Parker (David Graham reprising his voice role from the original series) but are joined by a new 6th member, Kayo. I’ll admit that the initial look at the CGI models was a little ropey but seeing them in motion is much different and I really dig the redesigns. Overall, it’s fantastic to see a full trailer for this show (after months of repetitive and unsatisfying ‘teasers’) out in the wild and hopefully we’ll be seeing more from this show in the future! What did you guys think? Be sure to let me know in the comments!