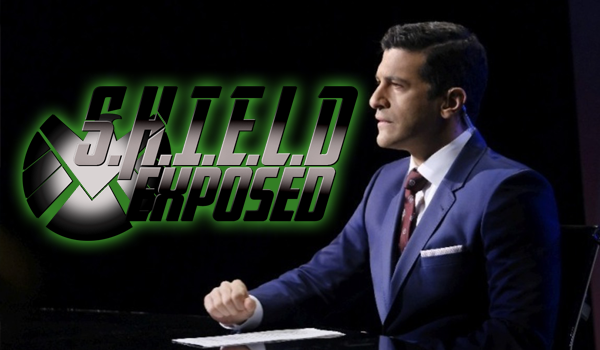 Oh boy, I don’t know how much of All The Madame’s Men subtext was conceived as a response to the current socio-political climate but it’s hard not to draw comparisons. We even have our own Bill O’Reilly (topical!) in the form of Sunil Bakshi! Simon Kassianides makes his first appearance in the show since his real-world death in The Dirty Half Dozen two seasons ago! If nothing else, this arc is great for bringing back long dead characters who have amazing screen presence.

Speaking of; Trip continues to be awesome and supportive and why did they kill him off again? Same with Brett Dalton, who is killing it as a kind and compassionate Grant Ward and despite how inherently wrong that feels, he makes me root for him. If only there was some kind of magical McGuffey that could make all these digital avatars of dead cool guys into flesh and blood…

Wait a minute! Project: Looking Glass! From what I can gleam from the explanation in the episode, the machine is designed to make machines human but I imagine it’s more along the lines of implanting archived memories and personalities into flesh and blood bodies. In a clever bit of  narrative sleight of hand, we discover that while Fitz has been finalising the design in the Framework, the Superior is constructing the actual one in the real world.

All of which could mean we’ll see not only Mace return but also Good-Ward and Trip! Hell, even Radcliffe and Agnes! Or even Hope, Mack’s fictional daughter! The possibilities are endless.

The episode opened with a cool gunfight, culminating in Madame Hydra getting quaked out of a window! That momentum carries us through the episode as the body cam footage May had is used to undermine the HYDRA regime and ends with Coulson declaring himself an Agent of S.H.I.E.L.D.

This entire arc has been really interesting and very entertaining but all goof things must come to an end so join us next week when Madame Hydra’s plan goes into action, the team scramble to stop her and we say Farewell, Cruel World!