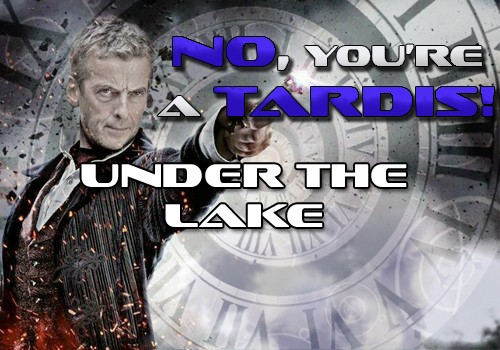 Review: Doctor Who – Under The Lake

Why does this feel like yet another retread of an episode we’ve seen before?

Toby Whithouse is a pretty decent writer. He’s written School Reunion, The Vampires of Venice, The God Complex, A Town Called Mercy and the Torchwood episode Greeks Bearing Gifts. They’ve all done stuff that I’ve liked and this episode is no exception but the real problem is that this is the first of two parts (all but 2 episodes this season will be serialised like this) so it’s hard to give an impression of the story when it’s incomplete but I’ll muddle along.

Clara Backdown 2015 gets a new wrinkle as we learn something new about her. When presented with a spooky underwater base that was clearly abandoned in a hurry, her first reaction is to say “Booyah, adventure!” and ask for a high-five. Really, Clara? Either you haven’t learned a damn thing about what this situation means or you are immensely callous. Shame on you.

Capaldi is a little more on form this episode, insulting people and getting excited by the idea of actual bone fide ghosts. More of this please!

The guest cast are pretty cool. Colin McFarlane is an astounding actor but he gets side-lined far too quickly and ends up silently stalking the base for the rest of the episode as a ghost. I’d like to give a special mention to Sophie Stone, the first deaf actor to work on Doctor Who. I was watching her performance closely, wondering if she actually was deaf or not, and she was pretty damn good as Commander Cass. There’s a couple references to Whithouse’s other episodes in the form of the first ghost who is Tivolian and one of The Doctor’s empathy cards, which references Sarah Jane Smith and her conversation in School Reunion.

The cliffhanger sees the group split between past and present and a truly grim fate for The Doctor that is such bullshit that I can’t believe they even did it. What is it this season and saying the Doctor is dying? He’s just got a fresh set of regenerations, he literally CAN’T DIE.

A fun little mystery set-up for the most part but can this two-parter stick the landing? Come back next week as we find out what happened Before The Flood.

Tags: Doctor Who, Jenna Coleman, no you're a tardis, Peter Capaldi, review, Season 9, Sophie Stone, television, Under The Lake