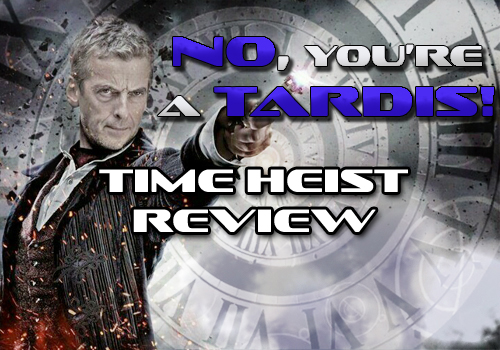 “Ocean’s Eleven meets Doctor Who”. Yup, that’s really about it.

The Doctor, Clara and two strangers arrive in a room, missing some memories and tasked with breaking into the most fortified bank in the universe. On the outset and for most of the episode, this is a pretty awesome premise. The set up and the characters are great but it kind of falls down at the ending for me. Saibra and Psi, the two other bank robbers who join the Doctor and Clara, are really interesting characters in their own ways, with issues and backstories and I really wish these two were companions. Would it be so bad to have some future companions or some that weren’t just baseline humans? Psi is an augmented human and Saibra is a mutant! That’s awesome! A half human, half computer and a shapeshifter would be hella handy to have and it doesn’t hurt that they’re likeable with good backstories. Hoping they show up again. The heist is tense, fun and full of danger and, surprisingly, has all sorts of little cameos. Psi’s accesses the bank’s computer files and we see a virtual “Who’s That?” of the Doctor Who universe rogues. Notable inclusions are John Hart (portrayed by the brilliant James Marsters) a rogue Time Agent and ex-lover of Jack Harkness and Abslom Daak, a comic character known primarily for having a boner for Dalek murder. There’s a few other monsters mixed in there for good measure too, from Doctor Who, Torchwood and even The Sarah Jane Adventures. Another fun little cameo (at least for me) was the voice of Kevan Brighting, the voice of the Narrator in The Stanley Parable. Love that guy’s voice so much!

I’m really finding it hard to write about this episode. It was solid and, apart from the stand-out characters, I can’t really think of much to say but hopefully that will change next week as we head to Coal Hill to TAKE CARE of business!