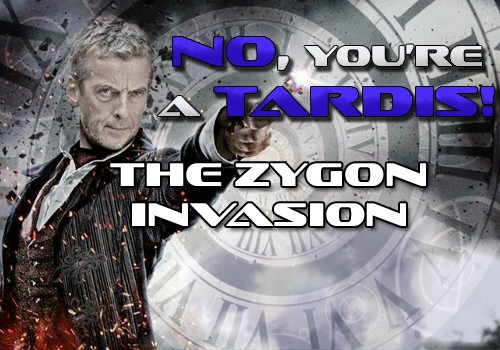 Review: Doctor Who – The Zygon Invasion

Mmmm, I need a cigarette after that.

The Zygon Invasion is the best episode we’ve had all season and the knowledge that we’ll be getting a second part to this is pretty exciting. Sure, there’s some dumb bullshit in the episode but for the most part, it was pretty engaging.

Now, let’s talk about social commentary. Personally, I like it in science fiction but it needs subtlety. Guile. Something other than a smack in the face. So when this episode approaches the Zygon invasion as a proxy for Muslim radicalisation, I could see that being pretty interesting. Then I remember this was written by Peter Harness, the same man who wrote Kill The Moon aka THIS IS ABOUT ABORTION!: The Episode.

It was handled about as ham-fistedly as you’d expect from this clown but apart from that, there’s some good writing here. There’s tension, there’s wit and there’s a really awesome twist!

The reappearance of Osgood was a head-scratcher for most, and the reveal that she may/may not have been a Zygon is a good way around that. They never let it slip if the remaining Osgood is human or Zygon, cleverly having her shake even the Doctor’s confidence by Osgood insisting that she’s both. Kate Stewart’s return is very welcome but she feels a little more gung-ho in this episode. Still, that may be because she’s the Kate-Zygon, much like there’s a second Osgood around. I don’t know, character inconsistencies usually get chalked up to doppelgangers, right?

Speaking of spitting images, did anyone else notice that the Zygon town was the same location as the town Christmas from Time of The Doctor? I wonder if Truth and Consequences has been used before…

Man, that Clara reveal was soooo good! Is it too much to ask that Clara is dead and the evil Zygon-Clara can be the antagonist for the rest of the season? Jenna Coleman makes an excellent villain, she’s got the right look of evil about her. Hell, she could play Missy and I’d be happy.

So that’s the first half of the Zygon two-parter and I really enjoyed it and I really hope the second half isn’t terrible but we’ll find out next week with The Zygon Inversion.