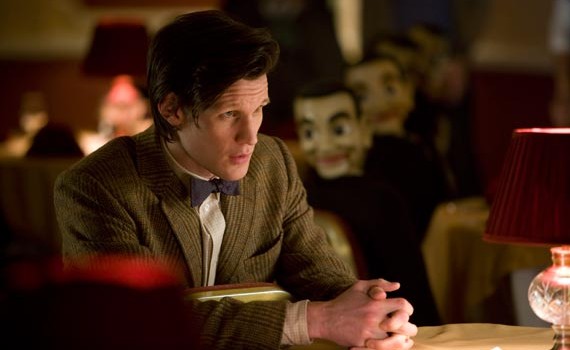 Review: Doctor Who – The God Complex

Welcome to another edition of “NO, you’re a TARDIS!” and I’m in two minds about this episode. It’s not to say it’s bad (There are some excellent moments within the episode) I just think the premise was too… I dunno. I think this episode was too similar in theme to ‘Night Terrors’ and ‘The Girl Who Waited’ to be shown immediately after those episodes. Toby Whithouse is a decent writer, having penned the previous episodes ‘School Reunion’ and ‘Vampires in Venice’ but this episode kind of falls flat for me. This is just my feeling but the setting and monster of the story held no tension or suspense and the only outstanding moments came from the characters.

The Doctor, Amy and Rory investigate a hotel of horror where repeat business is low but the body count is high… A mighty monster stalks the corridors and the rooms hold visions of Angels, apes and creepy clowns. Who – or what – has brought them to this place? And can the Doctor solve the mystery before the residents check out in grisly style?

The idea behind the rooms is an interesting one and we learn that once you’ve seen the contents of your room, you’re marked for death. We don’t see what the Doctor’s fear is in Room 11, but the Cloister Bell is heard. His exclamation of “Of course it’s you” is a very telling line and one that may be brought up later in the series though I think it’s safe to assume that it’s either the Doctor himself or maybe even the Dream Lord.

While the majority of the guest cast is ultimately forgettable, it’s Rita (played by Amara Karan) that steals the show. She’s a damn strong character and her rapport with the Doctor makes her intensely likeable which makes her death (and her final words) so powerful. It’s after this point that the Doctor realises how much danger he puts his companions in, something that has been approached before but is now finally acted upon as the Doctor sacrifices Amy’s faith in him to save the group. It’s after this that the Doctor drops Amy and Rory off at a brand new home and car. He’s letting them live out their lives rather than run the risk of standing over their graves one day. It is sad to see the Ponds sidelined but I’m sure they’ll be back (I really hope Rory comes back, he’s the best character on the show!)

This final scene of the episode is the most telling as the Doctor silently looks around the now vacant TARDIS, alone. Don’t expect that to last long as the next episode see the return of an old companion which I cannot wait for.

Ultimately, ‘The God Complex’ is a fine episode and although I have my issues with it, don’t be dissuaded from watching as the strength of it’s character moments are more than enough to carry the episode.