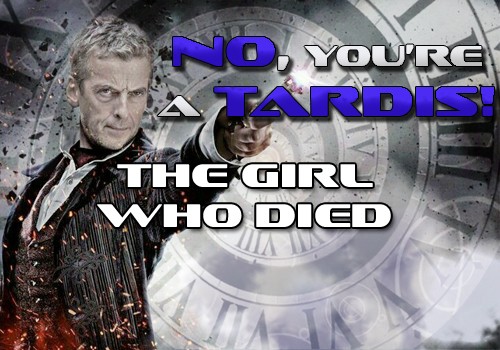 Review: Doctor Who – The Girl Who Died

Well, well, well. This was actually an engaging, intriguing and entertaining episode.

Jamie Mathieson might just be my new favourite Who writer. Between Mummy on the Orient Express, Flatline and now The Girl Who Died, he’s batting a thousand with entertaining episodes. Sure, the villains are a bit one note (See: Judoon-ish) but the character interaction is just delicious.

The Clara Backdown 2015 is halted for the week because Clara is not offensive this week. Hell, the Doctor’s line of “Oh, Clara… What have I made of you?” is exactly what I wanted for the beginning of her downfall and, though I am loathe to admit it, she looks cute as hell in the Satan’s Space Suit.

The Vikings are really anachronistic but that’s something for a history nerd to bitch about, I did like the “I think he was being sarcastic” line though.

Ashildr, played by Game of Thrones’ Maisie Williams, is yet another should-be companion and her ultimate fate is pretty interesting. She essentially gets Jack Harkness’d but unlike Ten, Twelve shows a degree of compassion by offering her a way to immortalise another person, someone she couldn’t live without. That’s got to be a thread we’ll pick up in the future but for now, we see the immediate burden that’s now been placed on her shoulders.

The nature of immortality is more tragic the more you really think about it. It’s not a gift, it’s a curse and as the Doctor all but says; dying is a privilege, one that immortals can never really earn. That said, dying isn’t as good as living and in a wonderful epiphany, we finally see the resolution to the whole face plot. The Doctor flashes back to his time as Ten and Donna’s pleading to save someone in the Fires of Pompeii, one of the people being Caecilius (a part played by Peter Capaldi) and what that face means. Saving lives is what the Doctor does, even if it’s just one. Plus I love it for basically having Ten show up and give Twelve a mental kick in the ass and have a subtle dig because Donna is the superior companion.

While not considered a two-parter by the wiki (god knows why, they’re definitely connected) Ashildr’s story continues next week as we stand and deliver for The Woman Who Lived.

Tags: Doctor Who, Jenna Coleman, Maisie Williams, no you're a tardis, Peter Capaldi, review, TARDIS, television, The Girl Who Died