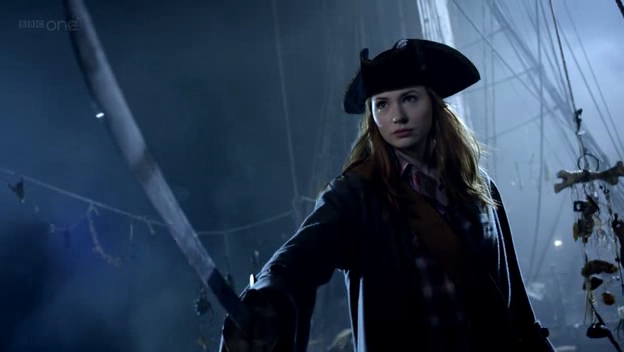 Review: Doctor Who – The Curse of the Black Spot Welcome back to DOOM’s newly christened Doctor Who column, “No, YOU’RE a TARDIS!”. First off I would like to thank Mr. Aaron Poole for coming up with that name and Mr. John Merker for that awesomesauce banner up there. Thanks you guys! Now, let’s get into this week’s episode.

Truth be told, I wasn’t too impressed with this pirate adventure. It felt like just another story about The Doctor arriving on a ship (usually a space ship but this time of the pirate variety) and the crew being picked off one by one and it’s up to The Doctor to save them. They did it a lot with the Tenth Doctor and it was a bit disappointing seeing the Eleventh doing the same old routine. Though there were a couple of good parts. Swashbuckling Amy saving the Doctor from having to walk the plank was a ton of fun. And for a minute there I actually thought Rory was dead which would have been a pretty ballsy move.

Two things in particular bugged me about this episode, both fairly minor. First, why did the Siren take The Doctor, Amy and Henry Avery to another part of the space ship while everyone else was taken to the sickbay? Did I miss something there? And second, there is no way a 17th century pirate captain could pilot a spaceship. I know a lot of suspension of disbelief is required from the start with a show like Doctor Who, but come on! But like I said, these are both pretty minor gripes. This week there wasn’t really much to do with the overall story of the series. We saw at the end that Amy is still struggling with keeping the secret of The Doctor’s death and that The Doctor is still trying to figure out what is going on with Amy somehow being pregnant and not pregnant at the same time. There was one particularly interesting thing though. The Eye Patch Lady appears for a second time on the ship’s wall in the same way she did on the door at the orphanage last episode. She seems to be monitoring Amy for some reason. My guess is it has something to do with the progress of the pregnancy.

Well, this brings us to the end of this week’s review. Be sure to comment and share your theories as they’re always interesting. Thanks for reading!

Tags: Amy, Doctor Who, no you're a tardis, River Song, Rory, TARDIS, The Doctor