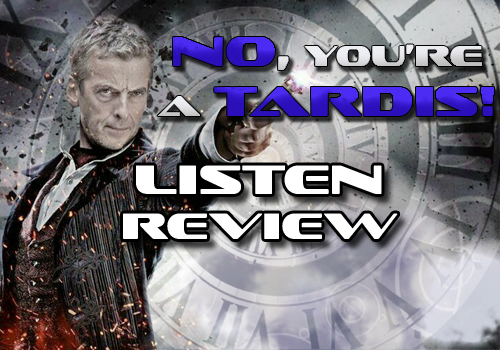 What’s that in the mirror, or the corner of your eye?
What’s that footstep following but never passing by?
Perhaps they’re not just waiting, perhaps when we’re all dead
Out they’ll come a slithering, from underneath the bed.

Hot DAMN! That was easily the best episode of the season. After a little stumbling with our new Doctor, Moffat returns on top form with a genuine creepy and atmospheric look at one of our basic fears: the monster under the bed.

Over the course of this franchise’s long history, you’d think this story might have been broached before but I don’t believe it has and if it was, it was never as good as this, I can assure you. The story starts off strong with the Doctor in full mad ramble. He postulates that there’s creatures in the universe who are nigh-invisible who possess “perfect hiding” (camouflage, Google it) and are responsible for your hair standing up on the back of your neck. THUS BEGINS 20 MINUTES OF BUTT-CLENCHING TENSION. But before that, we get the return of Danny Pink, and his date with Clara and boy, does that go about as well as you’d expect a date between a know-it-all narcissist and a socially awkward PTSD sufferer. They argue intensely and Clara returns home to find the Doctor waiting. He plugs her into the guts of the TARDIS and attempts to travel back to her childhood, inadvertently landing in the children’s home where Danny (then called Rupert) lives. This is where the tension kicks in as the Doctor questions the custodian about things moving and the like (even swiping his coffee just to really rustle his jimmies) while Clara goes all supernanny and reassures a frightened Rupert that there’s no monster under the bed, only her. With both Clara and Rupert under the bed, something compresses the mattress down and I actually applaud the show for it not being the Doctor in a comedic swerve but something genuinely unnerving.

This whole sequence was performed beautifully and the atmosphere was thick with dread as the creature did nothing but sit there and turn its head. It’s pure nightmare fuel at its finest and this 27 year old was sufficiently spooked, not to mention my 8 year old sister. The sequence on the spaceship later (yeah, there’s a spaceship too) is also pretty fucking scary, though I was chuckling as my little sister was steadily clambering over the back of the sofa.

Through temporal shenanigans involving the mental interface of the TARDIS, Clara winds up in an all too familiar barn, in the company of a crying child. Her snooping is interrupted by two people, one reassuring him and the other chastising, claiming he “will never be a Timelord”. If that wasn’t bad enough, when the child stirs and gets out of bed, Clara, hiding under the bed, grabs his ankle and inadvertently becomes the monster under the bed. She calmly urges him to get back in bed and go to sleep and before she slinks off, she thinks better of just leaving after scarring a childlord for life. Her nanny instinct takes over and, in a very touching and clever scene, she puts a lot of ideas into his head that have had payoff. She reiterates the 12th Doctor’s speech to Rupert, now to his younger first incarnation. “Never cruel or cowardly” and “Fear makes companions of us all” are phrases the First and War Doctors have uttered and we find out that this indeed the same barn as the War Doctor retreats to out of sentimentality. It’s a fantastic scene.

Now. The main point of contention for this episode is the “monster”. In the scene with young Rupert and later in the spaceship at the end of existence, people are having a conniption because they don’t know what the monster is. THERE IS NO GOD DAMN MONSTER. It’s a trick on the audience. The Doctor, Rupert, and Clara were all expecting a monster… And so were we… And that’s exactly what we got. But as Clara points out at the end of the episode: What if there was no monster? Sure, there’s little plot holes with that theory like Rupert’s blanket going missing but give me a better answer. Go on, write it in the comments below.

Listen is by far the highlight of this season so far and I truly hope this will be the standard for the series going forward but if not, this episode can join the likes of The Empty Child, Blink and Silence in the Library as a terrific tale of terror at tea time. It has a deliciously thick atmosphere, lots of great character development and a plot twist so twisty, we’ll have to rob a bank next week. That’ll be fun!