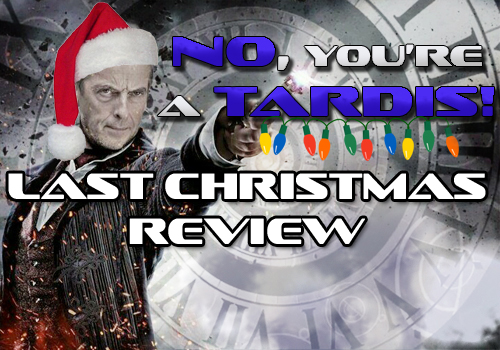 To sleep, perchance to dream. Aye, there’s the rub. For in that sleep of death, what dreams may come?
“Last Christmas” is this year’s Doctor Who Christmas special and, like every other year, is an homage to famous movies or stories. It just so happens to that this year, the episode is a pastiche of John Carpenter’s The Thing, Alien, the Justice League Unlimited episode “For the Man Who Has Everything”, Inception, and all under the bow of a Wham! Song title. Woof.

Despite how plagiaristic this is and how all of those elements mixed into an hour long CHRISTMAS special could culminate in a festering stew pot of rancid puke, I felt that the episode worked pretty well. It kept me invested, the monsters were scary, Nick Frost was a delight and the danger was all to real from start to finish.

Plot-wise, this is the mind-bendiest episode in a while but ultimately, very easy to follow but still no less entertaining, thanks to the thick atmosphere and excellent performances from the cast (except for those fucking elves.)

Nick Frost brings his trademark charm and wit to a role that could have easily been trite and lacking, well, personality. When you think about people playing Santa Claus, you get all the same tired-ass notes being played; like those same Christmas songs you hear every year. But thankfully, Frost brings his lovable personality and girth and make this Santa one to be remembered. I also love the animosity/begrudging respect between Santa and The Doctor. I really enjoyed sly dig he gives to the Doctor, who visibly seethes at the joke. The rest of the guest cast is solid, if very forgettable, only really being there as damsels.

I think my favourite sequence of the whole episode is when Clara first realises she’s in a dream and is swiping away the words on the blackboard. It’s a very simple editing trick but god damn is it an effective, creative and unnerving shot. I loved it!

In terms of returning cast members, we have Jenna Coleman, reprising her role as Clara and Samuel Anderson as Danny MF-ing Pink! Anderson is a welcome return, no matter how brief or imaginary because he rocks and his character rocks, being the funniest badass in the room. Clara’s return was not unexpected and, for the most part, perfectly fine. There’s resolution to the plot point of them lying to each other in their final goodbye and, thankfully glossed over because of the mortal danger they’re in. The chemistry is still there and that leads me to the biggest twist of an episode with multi-layered dreams.

I’m not sure if my mind is fuzzy from the six-pack of Bulmers I’ve drank this evening or my unforgiving rage. As confirmed by the media and this title card, Jenna Coleman is returning to the series, after an absence of NO EPISODES WHATSOEVER for the entirety Season 9. Huuuuurrrrrrrrgh. The Clara Backdown 2015 starts now!

Overall, a very entertaining, if a little a bit of a copy-cat, episode and I was really invested in it until those last two minutes but they’re not enough to turn me off the episode. Did you guys enjoy it? Are you looking forward to Season 9 and the return of Clara? Let me know what you think in the comments below and Merry Christmas to all you lovely people at home and to all a good night.