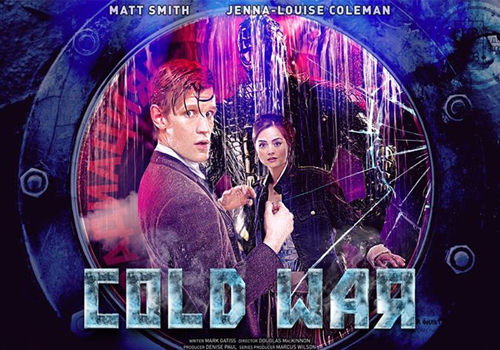 Welcome back to Sharp-O catches up on Doctor Who aka No, YOU’RE a TARDIS! Today, we look at the return of an old enemy, some fantastic storytelling and the best Russian accents this side of the East End of London. Cor blimey, guv’nor! Slip on your snuggiest long johns and let’s take a dip into the Cold War!
Cold War more than makes up for the bore fest that was The Rings of Akhaten. It’s got great storytelling, great atmosphere, a stellar cast and the return of an enemy not seen in thirty years… The Soviets! DUN DUN DUUUUUUN! Mark Gatiss is our scribe this week and you can tell because this episode doesn’t suck a fat sack of kolbasas. The Doctor and Clara land on a Soviet sub in the middle of the Cold War, not only do they have to deal with this already tense situation but they also have to contend with Grand Marshal Skaldak, a hero amongst Ice Warriors.

Fear and Loathing in Soviet Russia

Obviously this episode draws heavily from the Big Three of awesome alien movies; John Carpenter’s The Thing, Alien and Predator. The atmosphere on the tight, cramped sub is thick with tension with the world in the balance as the Doctor plays mediator between the Russians and the Martians, which is a sentence I never thought I’d write. Something I found very surprising in this episode was that the sub is a model, which one this episode soooo many points. Where’s a Stark when you need ’em, eh?

The cast, as stated before, is stellar with Game of Thrones stars Liam Cunnigham and Tobias Menzies and Captain Zhukov and Lt. Stephashin, respectively. They’re also joined by the brilliant David Warner, he of Tron, Time Bandits and Quest of The Delta Knight fame (That last one will get the MST3K fans hyped) but in the only real let down of the episode, none of them sport Russian accents. None of the Russian characters sport a funny accent and that’s a damn shame. Some of the dialogue that includes Russian words sound silly in London accents. Nicholas Briggs provides the voice for Skaldak and gives him a lot of pent up rage and sorrow which is brought out in his CGI face. We found out a lot more about the Ice Warrior culture in this episode, which I don’t think has been touched on before really, nor have we seen what they look like under the armour. “And I thought they smelled bad on the outside!”

Something I neglected to bring up in the last episode but I’ll bring up here since there seems to be some allusions cast in this episode too toward who or what Clara is. In Rings of Akhaten, Clara tries to enter the TARDIS on her own but is refused entry. Yes, the door was just locked but Clara concludes that the TARDIS does not like her, which is similar to what happened when Captain Jack returned and the TARDIS tried to throw him off the exterior as it bolted into the timestream. It might be nothing but it might something, much like an allusion to a past idea in this episode when Clara sings to calm her nerves. What song? Hungry like the Wolf!
Now, again, this could mean absolutely nothing but given Clara’s anomalous nature in time and the lyrics “I’m lost and I’m found, and I’m hungry like the wolf” could be seen as very telling, especially given the return of Ten and Rose in the 50th Anniversary.

Cold War gets a very high score from me, it’s damn near flawless! The Russian accents aside, this episode is entertaining, gripping and extremely watchable. The next episode sees the return of the writer of Rings of Akhaten, Neil Cross, so let’s see if Hide can hide from my scorn.