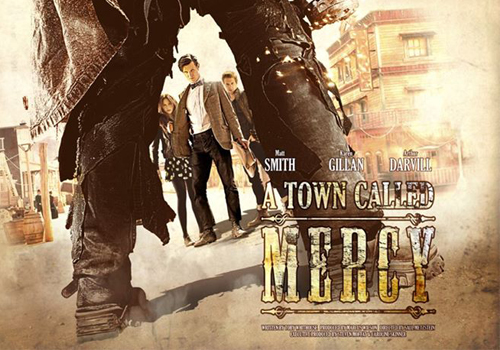 This episode was a hum-digging hootenanny!In the episode, the regular cast find themselves in a computer simulation of a Wild West town, facing a gunfight against the Four Horsemen of the Apocalypse.

Wait…. That’s the synopsis for the beloved Red Dwarf episode ‘Gunmen of the Apocalypse’. Damn it all, I did it again but for good reason. Ever since the earliest trailer for season seven, I saw that cyborg cowboy and instantly thought of that episode and all throughout the episode itself, I kept thinking it. It doesn’t help that one of the guest stars of this episode is Ben Browder, best known for his role as John Crichton on Farscape. The soundtrack also has an air of Firefly about it so this really is an incestuous boiling pot of sci-fi television and I love it.

A Town called Mercy is a tough one to review because there’s a lot of dark and heavy themes running beneath this episode but is ultimately light-weight. The main crux of the story rests with a villain who is much the same as The Doctor and thus hard to hate because his actions are similar to those taken by our hero at one time or another. As the villain, Kahler-Jex, himself says “It would be so much easier if I was just one thing.” A good man, who has made horrible choices, coming to terms with it and carrying the burden alone while trying to help others. Sound familiar?
Jex and the Doctor are played as opposites but are similar and I think that’s what infuriates the Doctor about him the most. Jex is played brilliantly by Adrian Scarborough and plays against Smith in such an engaging way. The Gunslinger is tragic and imposing but his voice is dumb, it sounds like the cheapest voice-changing effect they could find but I like the Gunslinger a lot and hope he returns at some point.

The rest of the story is really formulaic and it’s easy to see where it’s going at times. The main cast feel stiff and kind of one note in this episode, having few funny lines or even being integral to the plot. This could have been a stand alone sci-fi story without the Doctor even being there and the heavy burden undercurrent is the only thing that needs him there. Toby Whithouse wrote this episode, and you’ll remember him from last year’s The God Complex which I wasn’t too thrilled with.

The story is ultimately forgettable but the atmosphere is genuinely brilliant, it’s got the odd funny line and the ending gives a triumphant feeling which I assume will be touched upon again at some point. It’s a middle of the road episode but still worth watching.

Catch you guys next week for a more modern adventure in The Power of Three!