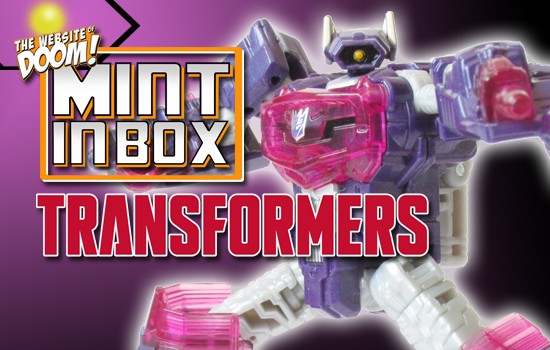 Hypothesis: What would happen if you took one of the most iconic Decepticon generals, down-scaled him, and made him into an accessory for the Combiner Wars line? Conclusion: You’d get a friggin’ sweet toy! Shockwave comes in the standard packaging for both Combiner Wars and the newer Titans Return. Moving on! Much like the Powerglide from this line and like Shockwave’s previous outing 2012; this logic machine takes the curiously illogical approach to his alt-mode(s). This is apparently a cannon mode but considering there’s no mount for him, he’s just lying around — unless you take a leaf out of 2012 Shockers’ play book and this is his ‘Cybertronian mobile artillery’ mode. The real value to Shockers is in his traditional gun mode which is a faithful update to his 1985 original. While not designed for children to wield; the wily cyclops has both a 5mm peg for regular Transformers to wield him but also a clip that allows for the CW Bruticus to handle like he did in The Revenge of Bruticus (here substituted by the other famous Decepticon cyclops; Lugnut!). Depending on the friction of each figure’s joints, Shockwave can be held pretty nicely by most. Shockwave’s transformation is simple and intuitive like many of his line-mates and the result is an adorably sized, yet perfectly proportioned, figure. He’s even around the same size as the Rewind I reviewed recently! Shockwave’s colour scheme is simply delicious; decked out in rich purple with translucent pink highlights and the grey of his limbs making him pop all the more in contrast, a single dot of yellow to pick out his cold monocular eye. The detail of his sculpting is impressive for a figure this size and with the help of a decent array of ball-joints and transformation hinges, you can get Shockers into a decent assortment of poses! For an RRP of £9.99, much like Rewind and Powerglide, it’s hard for me to sell a Legends scale Transformer as a good purchase at this price point but if you can get him for even a few quid cheaper (like I did), I’d say this diminutive yet definitive Shockwave is worth your time. It’s only logical, after all…