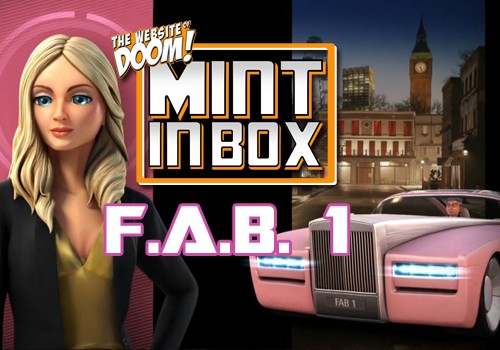 If you’ve got to save the day; do it with style!

Much like the other vehicles in Thunderbirds Are Go, Lady Penelope’s signature FAB 1 also got a funky new redesign for 2015 and now joins the ranks of the Vivid Imaginations’ Action Vehicle line. Much like Thunderbirds 1, 2, and 3, FAB 1 is sold on an open faced card back that offers the same strangely angled shape as the 4 vehicle set I reviewed not too long ago. The reverse features technical specifications and the toy’s actual features in Lady P’s signature colour and a quote from Parker that isn’t included, sadly. Out of the packaging, FAB 1 looks the business; a faithful representation of it’s onscreen counterpart. The soft pink is contrasted nicely with the sleek silver stripe down the centre. The trendy, minimalist design looks good from almost any angle; though the assembly lines can detract from the otherwise clean lines.

In terms of action features, I feel a little let down. In the sounds department — which are activated by pressing the silver trunk — we have a sound effects for driving, flying, and then one each for Lady Penelope and Parker. The voice clips are recycled from the show, which is fine because its nice to hear Rosamund Pike and David Graham rather than some random soundalike but the line’s themselves are kind of bland and not iconic to their respective characters. Hell, I think both lines are from the very first episode! Pressing FAB 1’s canopy down will deploy the wings from the underside of the vehicle and that’s it. Don’t get me wrong, they deploy with a very satisfying ‘whishk’ sound but the wheels don’t fold down, the engine doesn’t expand and there are no weapons to be found. For the Thunderbirds answer to James Bond’s Aston Martin DB5, this release is pretty lacking though I can appreciate that there’s budgetary restraints to keep the toy within the £9.99 price point, hence why all the Action Vehicles barring Thunderbird 2 only have one action feature. FAB 1 is equally on par with the other vehicles in this line (haven’t got my hands on the much anticipated Thunderbird S yet but I can’t wait to review that too) and is a good toy for its price though that mileage may vary depending on your own personal attachment to Penelope.