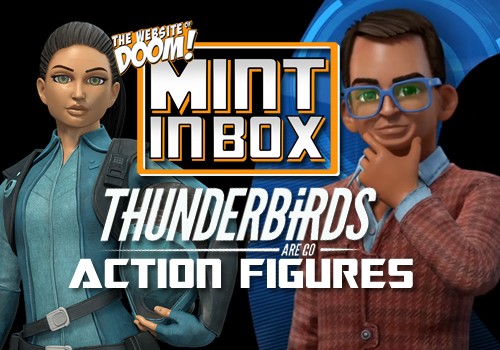 The three and a half inch Thunderbirds Are Go action figure line from Vivid Imaginations has already featured all the Tracy brothers and their nemesis The Hood but now they’ve added both Brains and brawn. Eh? No one appreciates quality punnage anymore… Kayo Kyrano is International Rescue’s chief of security, pilot of Thunderbird S and the niece of series antagonist, The Hood. While she appears to be a new character, she is actually a modernised version of the original series’ Tin-Tin. Her figure is a pretty faithful translation from screen to plastic and, especially for a figure in this scale, is pretty well-articulated — that is to say she actually has swivel elbow joints and knee joints. A lot of other similar figures recently have skipped this and I’m glad that Vivid hasn’t. Granted, it’s still limited but at least it’s something. Kayo comes with her signature wrist communicator and her unique helmet which is cleverly moulded to allow clearance for her hair. The head sculpt is a bit muddy but that’s a scale issue more than anything so I can forgive that but there’s something about her placid face and the way her eyes sit that unnerves me. It’s not quite right for Kayo to look so… Placid. Maybe a smirk or something could have improved the look, I dunno… Hiram ‘Brains’ Hackenbacker is the… well, brains behind International Rescue. His technical knowledge and scientific prowess are one of the cores of the team and he is an invaluable asset and ally. Brains features much the same articulation as Kayo and the other figures, but doesn’t have any accessories in the traditional sense but, at the very least, he looks rather dapper and you can pose him like his old puppet counterpart. The real highlight of the two-pack for me is M.A.X, Brains’ awesome robotic companion who assists in the lab and with the repairs of the Thunderbirds. M.A.X is deceptively articulated and by that I mean he has a ton of joints but also a fair number of fake joints that don’t move. Regardless, M.A.X is the only figure in the trio that I had genuine fun with because, for a faceless robot spider, he can be remarkably expressive! He’s an absolute blast and definitely the star of the two-pack. While Kayo only makes a passing grade for being my favourite character on the show, I would definitely recommend picking up the Brains and M.A.X set for a pair of characters you can have fun with posing.