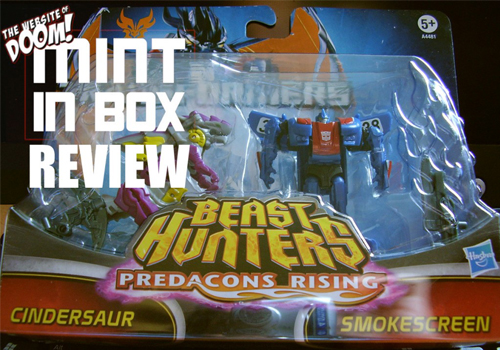 Hi, guys! Sharp-O back once again with another Mint in Box and today we’ll be burning in the fires of the beast. This review will leave you Transformed. Beware, dear readers, for the Predacons are Rising.

The Transformers Prime: Beast Hunters line has had some really interesting toys that I can’t wait to own and this sub-line throws more into the ring. Predacons Rising is a retailer exclusive sub-line for Target in the States and Tesco in the UK. Today we’re looking at a Cyberverse two-pack, bringing me one step closer to a Predacon gestalt and another edition to my Lost Light crew shelf. They’re the smallest-scaled Transformers out right now but they can be some of the most entertaining toys I’ve owned. Smokescreen is a damn good character, I was unsure of his inclusion so late to the series but Nolan North managed to make him extremely likable. In this two pack, the Cyberverse mould is repainted to look like Smokey’s G1 namesake and that’s always a great thing. His vehicle form is sleek, sexy and very cool, although there’s some weird issue with the back end. The pieces just don’t quite fit together the way you expect leaving the vehicle mode with a slight hump back. Let’s take a look at his robot mode! Smokey is a delight to transform, having enough steps to not be too simple but intuitive enough to keep it interesting. The finished robot mode is a great representation of Smokey at a tiny scale and his sparkly red really pops against the navy blue. For a cheap repaint, he’s a solid little figure, despite the problems in vehicle mode. But where there’s Smoke’, there’s Firecon and Cindersaur is a fantastic G1-inspired repaint of Predacon gestalt leg, Rippersnapper. His beast mode is an awesome looking bipedal dragon shark monster. Cast in grey and, what I believe to be, the same purple as my bedroom walls. Clearly Hasbro is keeping tabs on what shades of purples I dig. I love all the Cyberverse Predacons, not only because they combine into the dread Abominus but also because they’re all brilliant figures, each in their own right. Although again, he has a little trouble in beast mode keeping his face together. Which is an unfortunate undercurrent in this two-pack. Let’s heat things up in robot mode. While the transformation is much more involved, having to pull double duty for both robot and leg component, the result is a stocky little chap that I just adore. He’s one of the smaller Predacons on the market but he’s got bulk and you cannot ignore his girth. He’s definitely the star of this two-pack for me. The Transformers Prime: Beast Hunters – Predacons Rising Cyberverse Cindersaur & Smokescreen two-pack (Can you see why I abbreviated the review title now?) is an awesome little set with only a couple niggling issues to tarnish what is otherwise a solid release for this line. I picked this up for around half price and I’d definitely recommend it for that price.