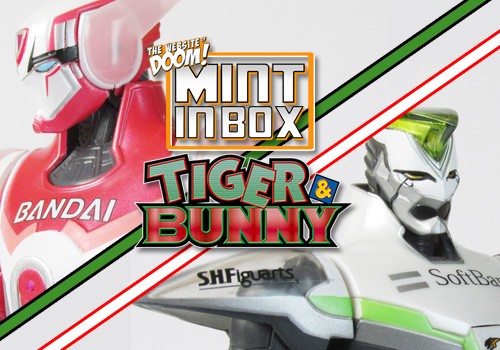 Hello, Heroes! Welcome to a review that was a long time coming. Way back in the halcyon days of February 2014, I was beginning what would eventually become known as my Anime Renaissance and the first step back into that deep, spiralling pit was a little show called Tiger & Bunny.

Set in a world where corporate sponsored superheroes compete in a heroic reality TV show. The series see a low-ranking veteran hero, Kotetsu T. Kaburagi aka Wild Tiger, teamed with the rookie Barnaby Brooks Jr. Together, they embark on a buddy-cop adventure of justice, revenge and what it truly means to be partners in crime-fighting.

It’s a fantastic show and I highly recommend it but one of the cool things about the show is the sponsors; most (if not all) are real brands and corporations. Naturally, Bandai produced figures of all the character in the show under their S.H. Figuarts line and we’ll be looking at the titular heroes today! Barnaby Brooks Jr, or ‘Bunny’ as Kotetsu affectionately teases him, is the young upstart who doesn’t have a codename and has a Bruce Wayne complex like you wouldn’t believe! His toy offering is… Not good. It’s barely Marvel Legends tier and that’s a pretty low bar for a Figuarts to stoop to. The entire package includes Barnaby, a custom Tamashii stage (every T&B character gets one, which is neat) an extra forearm guard, his Good Luck Mode leg and a whopping TWO pairs of interchangeable hands. Barnaby himself looks rather dashing in his armour, his reds, whites and translucent pink all pop vibrantly. He looks like he stepped right out of the anime on those heavy die-cast legs of his. Naturally, the extra weight has made his hips rather droopy which is a pain but this is one of the older style Figuarts so you take the rough with the smooth. If there’s one downside, it’s the collar of the armour severely restring the ball-jointed head’s movement. Out of the box, Bunny is sporting two Crusade branded gauntlets but you can swap one of those out for an Amazon.co.jp branded one. Across his chest is a giant Bandai logo and there’s even a cute little Bunny logo that matches Tiger’s. The Good Luck Mode special attack is one of the first times Kotetsu and Barnaby truly sync up as a duo and it’s amazing. Granted, the armour add-ons are purely cosmetic, they still look bad-ass. The plastic counterpart is a solid representation, swapping out the whole leg assembly in a rather frightening way, and even has a little bit of articulation. Overall, Barnaby is a poor outing for the S.H. Figuarts line. That’s not to say there aren’t good points but really, he feels more like an accessory than a figure in his own right. Kotetsu T. Kaburagi. Veteran hero. Widowed father. Goofball DILF (by Blue Rose’s reckoning) and one of my all-time favourite superheroes. Wild Tiger is a true believer and a trouble magnet, as well as a well-dressed underdog. This particular release (one of four for this particular mold) is for later in the show when Kotetsu’s powers begin to deplete to the point he can only activate them for one minute at a time. Despite the severe downgrade, he still fights one as Wild Tiger 1 Minute! His accessory count is what drew me to him, including a custome Tamashii stage, twin Wild Shoot grappling hooks and SEVEN pairs of hands, all of which are signature poses from the show and omitted from every other release. I love the Wild Tiger armour, it couldn’t be cooler if the green parts were orange. As opposed to the lithe form of Bunny, Tiger looks like a brawler and is more built for strength than speed. His logos are for S.H. Figuarts and SoftBank and the nape of his neck boasts the exclusive title he sports toward the end of the story. Much like Bunny, Tiger is super heavy thanks to the die-cast legs. Kotetsu’s Wild Shoot allow him to swing around Sternbild City like Spidey and to grapple enemies, rendered here in clear orange wire which refuse to straighten. His hands are amazing and I love them all. They give the figure so much character and expressive ability, whether giving people a cheeky double thumbs-up or a Wild Roar or making fun of Barnaby and his ears. Overall, Wild Tiger 1 Minute is a fantastic release and I’m super thankful to Josh from CollectionDX for buying this me for Christmas and all but forcing me to buy Bunny to go along with him. More than any other dynamic duo, you need both Wild Tiger and Barnaby Brooks Jr together if you’re a fan of the show and I recommend getting them, even if one half is letting the team down.