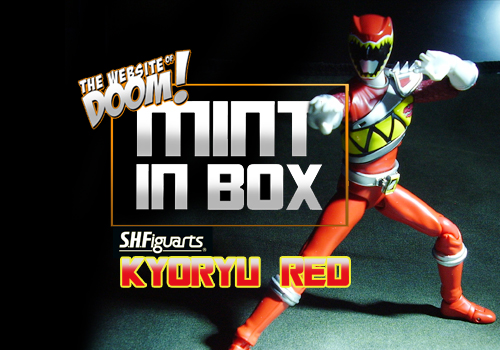 It’s gonna get wild as I review the Strongest and Bravest in history! Vamola!I do a lot of Power Rangers reviews for this site (Big-ups, Bandai UK!) but I’m actually a massive fan of Super Sentai, the source material for Power Rangers. The latest iteration, Zyuden Sentai Kyoryuger, is a dino-themed sentai and is the focal point of this review, as is S.H. Figuarts.

S.H. Figuarts are Bandai Japan’s action figure line du jour, it covers a wide range of Super Sentai, Kamen Rider and anime series past and present. The line is defined by its tag line; Simple Style and Heroic Action. What this translates to is detailed paint apps, lots of articulation and more accessories than you could possibly use at one time! But enough rationalising and setup.

Zyuden Sentai Kyoryuger Kyoryu Red was released earlier this year and is also my very first Figuart. Prepare for an immense amount of gushing. The packaging is great, it’s a window box which showcases the figure and many of the accessories and evokes the overall aesthetic of the show and team. The back features many of the poses this figure can pull off and before you even get it out of the box, you know this trounces most of Bandai of America’s efforts. The tray inside is clam shelled so those pesky small bits don’t fall out but just look at the amount of stuff you get! Four pairs of interchangeable hands, an Armed-On arm, Gaburevolver, Gabucaliber, Gabutyra Fang and a tiny little Zyudenchi (Beast Battery) that I’ve only taken out once for a pic then put right back in the tray for fear of losing it. Out of the package and I am in looooooove. Just the feel, the weight and the details are perfect. Unlike Bandai of America’s ‘roided up Power Rangers, Figuarts go for authenticity and how the suit actors look, even moulding clothing wrinkles. If I have one thing to knock, it’s a personal issue with the left knee. When I move it, it squeaks. That’s it. That is the only complaint I have and I’m sure it’s not a wide spread issue. When dealing with Figuarts, the accessories really add so much bang for your buck! Ever messed with an action figure and thought “It’d be great if this figure had something other than this dumb weapon holding hand.” Well, you can swap that out for a fist or a posed hand or even an alternate weapon holding hand and the various combinations can reveal some fun poses. The weapons have just as much detail as the figure, with intricate moulding and show accurate paint applications. The Gaburevolver is the Morpher and sidearm for the series and has a fun aesthetic to it. It’s counterpart, the Gabucaliber is the standard sword and favoured weapon of KyoryuGreen, it’s pointy and sharp so watch out! When the cylinder chamber of the Gaburevolver is rolled against a Kyoryuger’s right arm, this unlocks their Armed On forms and grants access to their signature weapons, in this case, the Gabutyra Fang. This T-Rex themed knuckleduster is equally as detailed as the other weapons and even gets a cool glossy red. Word of warning though, the first couple times swapping the arms out was pretty harrowing but if you apply an even pressure of bicep and torso, you should be fine. Also keep in mind the positioning of the joint assembly. First time I did it, the assembly ended up upside down and the articulation in that shoulder was a little screwy until I put it right. Hear my roar! As my introduction to the line, Kyoryu Red is a fantastic entry point into a world of dynamic poses and exquisite detailing. You pay for quality and that’s what you get in spades. You can find many Figuarts online for pretty cheap so if this review has piqued your curiosity, be sure to check those out and if you’re on the Mighty Morphin’ Power Rangers 20th Anniversary kick, there’s Figuarts available right now for the Red, Green and Pink Rangers on Amazon!

Thanks for reading and I’ll catch you guys next time on Mint in Box!