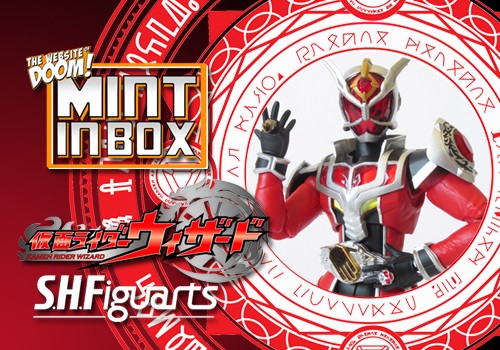 Kamen Rider Wizard is an odd series for me. In concept, a magical Kamen Rider who saves people from falling into a deadly depressive despair caused by Phantoms should be my cup of tea but I just never got on with the series, despite a cool premise and awesome looking Rider design.

So why am I not reviewing the base form? Because, according to trusted review sources (aka Josh over at CDX), that Figuart is garbage and I will not have garbage on my Rider shelf. Trash, yes — garbage, no. Let’s cut to the chase then and take a look at this mage! Wizard’s Flame Dragon style passes over to his box, with a dull silver and red dragon sigil surrounding the window. The reverse sees full colour images of Flame Dragon form with Wizard’s summoning circle in the background. Pulling Wizard out of the packaging reveals a very literal box of tricks. He includes six pairs of interchangeable hands, a reversed WizarDriver, the WizarSwordGun in both sword and gun forms and the Drago Skull. It’s a robust selection of accessories but I feel he may have too many hands? Blasphemy, I know, but some are only slight variations on others plus those bulky Wizard Rings on each hand makes swapping them out almost as painful as handling Bravo. He also includes a pretty ugly Tamashii stage but I’m not going to grumble at more stage arms. It’s Showtime! Flame, Dragon! Haruto’s first elemental Dragon upgrade looks fantastic; taking the long flowing coat of the base form and adding more draconic elements to the design. The figure is well constructed and the joints are nice and tight but is it just me or are his feet a little big? One thing I love about the Wizard design is that the helmet reflects the jewelled ring aesthetic and the translucent red ‘gem’ of a faceplate is executed amazingly well. Add to that the tandem gems and runes on his pauldrons and the jewelled elements on the torso, and you’ve got one stylish looking mage! True to S.H.Figuarts’ regular high standard, the WizarDriver is beautifully detailed; shimmering silver with the Hand Author picked out in an intense gold and dark translucent plastic with a detailed rune behind it. Attached to his hip, Wizard carries the Wizard Rings which give him access to his various forms and the various spells he can utilise. Both forms of the WizarSwordGun are highly detailed and have the Shake Hands opening gimmick to activate the various Final Strikes. I’m not sure which I prefer overall but I feel the Flame Dragon upgrade should have a unique weapon to add to Wizard’s arsenal. Oh, wait… Each of the elemental Dragon forms includes a specialised dragon weapon and Flame’s is the Drago Skull which is by far the goofiest one and I say that knowing that Water Dragon includes the Drago Tail. The dragon skull, which is a swappable chest piece that sticks out of Wizard’s chest, has a decent amount of articulation — the neck moves, his ears waggle and the mouth opens. Stacked up to both his predecessors and his successor, Flame Dragon looks pretty cool but I do lament that this isn’t a good version of the base form because that would look so much cooler. Overall, if you need a Wizard for your Rider shelf, you can’t really go wrong with Flame Dragon as he looks great and is a functional figure, even if his colour palette is a shabadoobie touch too red. Have any thoughts on Wizard or the Figuarts line? Let your voice be heard in the comments and I’ll catch you guys next time on Mint in Box!